For the first time since we departed Dallas six months ago on our Year on the Edges of America adventure I have an unobstructed view from the passenger side of our Nissan Xterra.

For all the wrong reasons.

It started out as a delightful Thursday morning….

We had pulled into the RV parking lot with Mom at the Tulalip Casino just north of Everett, Washington as prep to putting her on a flight home to Dallas the next day from Sea-Tac airport. The three of us slept well in our tiny comfort egg Casita travel trailer as it drizzled rain outside all night. Awake by 7 a.m., we savored our coffee together in the Casita and reminisced about the wonderful four days we’d just spent on picturesque Lopez Island in Washington state’s Salish Sea renewing a special set of friendships dating to the 1950s.

Here’s a view from one of our walks on Lopez Island, this one to Watmough Bay. 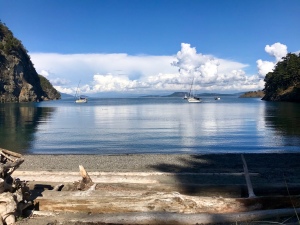 Mom, eager to stretch her legs, was the first to step outside in the damp dawn. She strolled slowly around the car and Casita.

Minutes later, she returned to the Casita door: What did you do with the bikes?

What do you mean, Georges asked.

The bikes aren’t on the front of the car.

G quickly put on his shoes, stepped outside and walked to the front of the car. I followed, still in my pajamas and barefoot on the wet pavement.

Sure enough, our bikes – one 2010 Trek Madone 7.1 hybrid and one 2016 state-of-the-art Scott trail bike (the best-ever gift last year from my stepson) – had vanished.

A “before” picture, with the Canadian Rockies in the background: 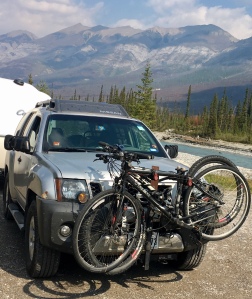 The “after” picture, what Mom discovered Thursday morning:

Peaking out from the pavement under the front of the car was a large, heavy pair of bolt cutters. A pool of oil – not present the night before – glistened on the pavement nearby.

My heart rolled over. For a minute, I couldn’t breathe.

G pulled the bolt cutters out from under the car before we realized we’d probably contaminated the crime scene with his fingerprints. 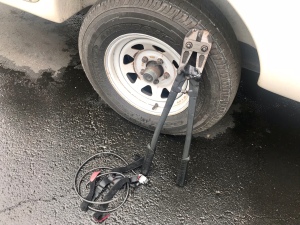 The bikes were there the previous night when the three of us returned from dinner. We’d enjoyed hot sandwiches and cold drinks at the casino after taking the ferry back to the mainland from Lopez Island and beginning the 100-mile drive south to Sea-Tac.

They were carefully cabled and locked onto the bike holder on the front of our car, seats removed and seat stems carefully plugged with champagne corks to prevent rusting – just as they have been every night since we left Dallas on March 1 nearly 18,000 miles ago.

… and now they were gone.

I got dressed. Mom and I walked back to the casino to report the theft to security while G more carefully surveyed the situation.

We passed dozens of RVs in the parking lot on the short walk into the office. Why did their bikes all seem undisturbed?

A member of the casino’s security staff met us back at the scene of the crime. He took our information. Then he called the tribal police. (The casino is on reservation land in an urban area.) 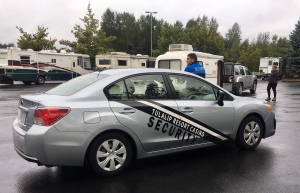 It took nearly an hour for Officer Zoller to arrive. Bike theft understandably isn’t a high priority. He took another report.

Both men were professional, neither very hopeful.

We’ll put it out on the scanner….

We get a lot of bikes in this area….

We’ll be in touch if we find them….

Theft of over $750 is a felony; will you want to prosecute?

By 10 a.m. we were back in our car and on the road to take Mom to the airport. For the first time since March I had a near-panoramic view through the windshield – no bike handlebars splitting my vantage in half.

But I’d grown to love my split-in-two view. Mainly because I loved our bicycles. It had taken us a long time to figure out just how best to transport them on this trip. And it’s a good thing we persevered. We’ve pedaled several hundred miles on them since leaving Dallas – around Goliad, Texas; Gulfport, Mississippi; Mobile, Alabama; across St. Petersburg, Big Cypress, Key West, Miami and St. Augustine in Florida; around Jekyll Island, Georgia; Prince William Forest Park in Virginia; Harper’s Ferry, West Virginia; Provincetown, Massachusetts; Cape Breton, Nova Scotia; Noyan, Quebec; northern Michigan; Door County, Wisconsin; and more….

My eyes crossed watching the windshield wipers struggle to keep up with the rain….

We got Mom to the airport in plenty of time. I stayed with her until she boarded. By the time, she’d landed some four hours later in Dallas, we’d purchased new bikes – cheap ones from Walmart that cost less than 10 percent what our other bikes were worth. 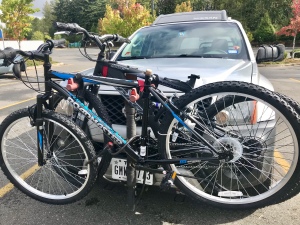 They’ll get the job done; we figured all those other RVs in the casino parking lot probably retained their bikes because they weren’t worth stealing. Neither are our new ones.

I know it’s silly to get all depressed over a couple of stolen bicycles. As G points out: The thieves didn’t snag our iPhones; our comfort Casita egg is intact, we weren’t mugged; neither of us has a broken leg.

But it’s creepy to think about somebody slinking around just a few feet from us as we slept and swiping our beloved bikes. Here’s hoping they try to ride them, sans the seats, which are still in the backseat of the car.

May the stick stick.

39 thoughts on “A rude awakening”