We’ve spent the last couple of weeks puttering along the coasts of Louisiana, Mississippi and Alabama, marveling at the contrasting coastlines and cultures.

We’d been to New Orleans and other parts of inland Louisiana before, but never to the Gulf coasts of these three states. We’ve been stunned that in less than 400 miles, we could go from swamps and bayous to sparkling squint-white beaches to a cosmopolitan skyline of high rises.

That’s a bit of an oversimplification, of course, but it’s a useful organizing structure for cataloguing our impressions. Working from our most recent experiences backwards:

The state’s coastline is barely 60 miles, but Mobile has a special skyline. It’s dominated by two needle-topped high rises – the RSA Battle House Tower and the Renaissance Riverview Plaza Hotel. These are the tallest high rises in Alabama; the RSA tower at 745 feet is the tallest on the entire Gulf coast outside of Houston.

The coastline drive and 40-minute ferry from Dauphin Island to Fort Morgan is beautiful – even on a windy overcast day with choppy seas. 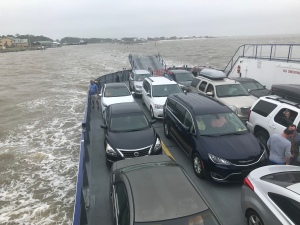 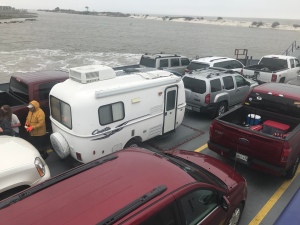 I’ve never really thought of Alabama as cosmopolitan, but our time in downtown Mobile prompts me to update my presumptions. It was hopping last weekend with buzzy nightlife at the various bars and restaurants along Dauphin Street. And the crowd at the fourth annual Cajun Cook-Off on Cathedral Square on Saturday was surprisingly diverse – young, old, black, white, gay, straight, male, female, high brow, low brow.

The food was good, too. We sampled everything from alligator to boudin to various gumbo and bisque combinations offered by the dozen-plus competitors, including Wintzells Oyster House, LoDa Biergarten and Butch Cassidy’s Cafe.

Earlier in the day, we spent nearly two hours at the little-known and excellently curated History Museum of Mobile. Stunningly, this museum doesn’t appear near the top of any of the Things to Do in Mobile lists we consulted. We stumbled into it looking for Fort Conde, and I’m glad we did.

It traces the area’s history under French, British, Spanish and U.S. rule, (like Texas, Alabama boasts its own “six flags” – those four plus the Confederate and Republic of Alabama flags) and includes a clear-eyed presentation of the city’s racist past. I’d never appreciated the significance of the role Mobile played in major wars – the museum’s presentation of the primitive submarine hand-pedaled by eight men that sunk a key Union ship in the Civil War was especially enlightening – nor its impressive array of modern-day sports heroes, including baseball great Hank Aaron.

Still, there is a certain air of wistfulness about it all. “Yes, Mobile used to be the Paris of the South,” a young woman with Pepsodent-perfect teeth working at the museum’s front desk sighed as we exited.

We also enjoyed the Carnival Museum of Mobile – all three floors of it. Mobile claims to be the birthplace of Carnival in the U.S. and dates the first celebration to 1703. New Orleans may dispute that, but there’s no question that Mobilians take their Mardi Gras seriously. 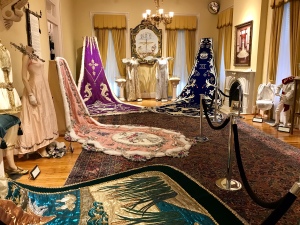 Carnival in Mobile actually starts in November when the first of scores of mystic society balls begin. Dozens of parades take place beginning after the first of the year and the celebrations only escalate through to midnight before Ash Wednesday in February.

The pageantry is unbelievable. And incredibly old school. It is dominated by 150 of the wealthiest, most influential families of Mobile. Always has been. (Didn’t we fight a revolution to replace nepotism with a meritocracy?)

Our guide explained that:

• There is a black royalty and white royalty. Still separate but, allegedly, equal. During the festivities they sometimes appear together and honor one another, but the coronation protocols remain separate.

• Families spend extravagantly on the trains that go with the gowns – “from the cost of a Lexus SUV to the price of a small house.” The gowns are generally only worn once and then they go into cold storage. You cannot wear the same dress/train twice, but you can cut pieces from old ones and use them to decorate your new train. We saw one train from many years ago that used the fur of 11 leopards.

• Some trains are so heavy that they have stainless steel rollers attached underneath to make them easier to wear/pull.

Finally, in Mobile, we opened the bear spray we bought a week ago in Louisiana amid campsite warnings of bear sightings. A lot of good it will do us here….

The Magnolia State has a little more coastline than Alabama – but not much – and it is absolutely gorgeous.

We spent a night on a quiet street in Pass Christian near Bay St. Louis and then rode our bikes on the beachfront bike path from Gulfport to Biloxi and back, about 25 miles. I couldn’t take my eyes off the sparkling white beach and cobalt blue water. It was a slightly overcast day, but everything was so bright. Even with my sunglasses, I was constantly squinting.

We loved that we were on the “Least Tern Highway,” named for the white-and-gray black-capped birds in the area that skim for small fish to eat and sometimes dive-bomb their prey from the air. We pedaled past the Sienna Hotel, the Great Southern Golf Club, an IHOP, the Edgewater Village Shopping Center, a Motel 6, the Mississippi Coast Coliseum and Convention Center and Beauvoir, the post-war home and library of Jefferson Davis (really?).

We were so excited by the beauty – and by the adrenalin rush of having finally gotten some real exercise – that we neglected to take any pictures.

I did manage to snap this one of an innovative “pop up” van in a parking lot a block from the beach in Gulfport. It’s a shame its owners weren’t around when we were; I would have liked to meet them. 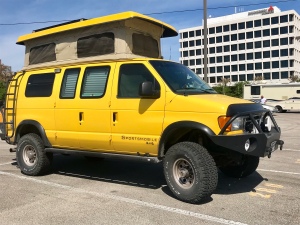 As we drove east from Biloxi toward Mobile, Route 90 (yes, the same one that starts in Van Horn, Texas) starts to feel more like The Strip of Las Vegas. We drove past the White House Hotel, the Beau Rivard Casino, the Hard Rock Casino, Harrahs, the Golden Nugget Casino – and then, finally, some sparser, poorer sections.

All along this part of the coast you still see remnants of Hurricane Katrina. In between the houses and commercial buildings remain chunks of vacant real estate, where the buildings ripped from their foundations in 2005 have never been replaced.

The Pelican State boasts some 275 miles of coastline, most of it interlaced with swamps and bayous. Yes, there are some coastal beaches, but they are few and far between. We spent most of our time along rivers and lakes instead.

I’ve never seen so many majestically gnarled Live Oak trees draped in yards of Spanish moss. They give even the most manicured portions of the landscape a haunted feel.

The frequency of ferries and draw bridges across southern Louisiana caught us mildly by surprise, pleasantly so since they are so picturesque and we’re not in a hurry. We spent a lovely two nights in the Palmetto Island State Park south of Lafayette along the Vermillion River.

It rained off and on while we were there, which provided welcome down time to do some reading and writing. We washed some clothes in our Wonder Washer but it was so wet outside we couldn’t get them to dry. Turns out this state park has free washers and dryers. (Yes, you read that right; they are truly free. And no lines. Nothing beats a dryer when it’s misting outside.)

If Palmetto is any indication, Louisiana loves its state parks – and loves to regulate them. This one was lovely, with big, spacious, private campsites that were neat, clean, well maintained. The park’s rules included limiting the length of dog leashes permitted in the parks to not more than five feet. Not only are children under 12 not allowed to ride in the back of a pickup, under no circumstances may anybody dangle their legs from the tailgate. I got pinched by a sour-faced park ranger for driving the wrong way in the rain on the campsite loop – I was just taking a shortcut from the “comfort station” (aka public restrooms/laundry) to my campsite site about a dozen spaces up.

We posted our sixth Casita sighting at Palmetto. (Yes, Casita owners are a bit of a family, complete with our own club online and regular rallies around the country.) It was pleasure to talk to Jill of Lafayette and her sister from Beaumont about Jill’s new trailer. We had noticed several vintage campers in the park. Turns out this weekend was a rally of the Louisiana Belles, an organization of women with vintage campers. Many are members of Sisters on the Fly, a similar national organization with thousands of members. (A beloved friend of ours in Phoenix is a founding member.)

We loved the Rip Van Winkle Gardens on Jefferson Island. We spent more than two hours touring them and the historic house, and conversing with the peacocks roaming the grounds. The house was built in the 19th century by Joseph Jefferson, the stage actor who brought Washington Irving’s Rip Van Winkle to life on stages all over the world. 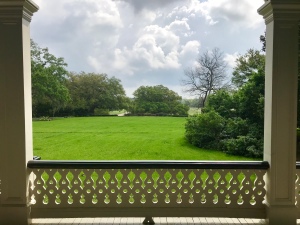 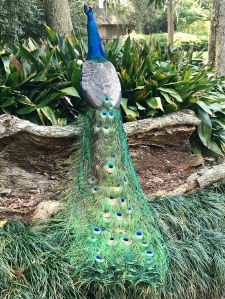 The gardens’ other claim to fame: On Nov. 21, 1980 they and everything else in the area got sucked underground in a whirlpool vortex spanning a quarter-mile that was created when oil drillers punctured a salt mine underneath Lake Peigneur. I vaguely remembered this news story from when I was working at The Associated Press in Phoenix and couldn’t wait to Google it back in the car; in the meantime, the museum had an excellent video recapping what happened.

•Drove by acres and acres of sugarcane and rice fields; it took us awhile to figure out what those floating white knots were in large ponds of standing water – crawfish traps.

•Visited the impressive Laura’s Plantation to learn more about the history, economics and social structure of this part of the world. Tours of the mansion, gardens and slavery museum were impressively straight-forward and informative.

•Cruised down the breathtaking Live Oak Alley at the Evergreen Plantation, probably the most photographed plantation in the state. Portions of Django Unchained and many other movies were filmed there.

•Puttered across several areas of New Orleans, including the lower Ninth Ward, where concrete entry steps surrounded by weeds are all that’s left of pre-Katrina houses on many lots. Yet blocks away, the colorful and architecturally unusual houses financed by Brad Pitt’s foundation are bustling with activity, contributing to the city’s remarkable, if tedious, hurricane recovery. 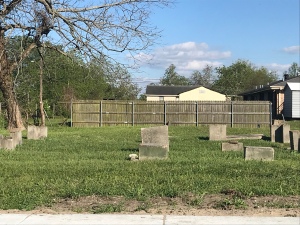 We’ve been on the Gulf Coast now for three weeks, and as you can probably tell, we’re bordering on sensory overload. And really, we’ve just begun.

8 thoughts on “The three middle faces of the Gulf Coast”