Several years ago, Georges and I had planned a weeklong trip bicycling the 185 miles of the historic C&O Canal that runs from Washington, D.C. to Cumberland, Maryland, staying in historic lodges along the way. But G broke his back in a cycling collision with a pole on the Santa Fe Trail near downtown Dallas and we had to cancel.

We decided to do a piece of that excursion last week, so we jogged inland a few dozen miles from our perimeter route to Harpers Ferry, West Virginia.

But we arrived in Harpers Ferry only to learn that the previous weeks’ torrential rains had washed out sections of the trail. So cycling to Leesburg was out of the question.

Double darn, actually. Why was cycling the C&O proving so difficult for us?

Still, the weather was great while we were camped at the KOA in Harpers Ferry so we cycled around the the Historic National Park and town. We were able to bike about an hour upstream (instead of downstream) along the C&O canal before running into a wash-out and so that’s what we did.

(In the small-world department: We were accompanied at the KOA by the senior class from Woodberry Forest School, a private boys boarding school about two hours from Harpers Ferry. They were a rambunctious but respectful bunch, enjoying their last outing together before graduation. I googled the school later and learned that it has a fine reputation – and that Democratic Congressman Beto O’Rourke of Texas, who is challenging GOP Sen. Ted Cruz this fall, is listed among the school’s “Notable Alumni” – class of ‘91.)

There are sections of the Potomac in this area that are calm and ripple-free, like a glass tabletop. But others are full of rapids. Small wonder: This is the steepest part of the river, which drops 20 feet in two miles. The genius – and expense – of the canal was constructing five locks within those two miles, the remnants of which remain today. 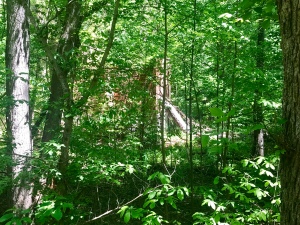 Construction of the canal began in 1828, when John Quincy Adams was president. The dream was to create a navigable waterway from the tidewaters at Georgetown to the Ohio River.

But it was never much more than a dream. Soon the canal was in a race with the railroads to make that connection. It got part way, but by the time construction concluded in 22 years later, the railroads had won. The B&O completed the link to the west; the canal never made it to the Ohio River.

The canal ceased operation in 1924, but was rediscovered by historic preservationists in the 1970s. Led by U.S. Supreme Court Justice William O. Douglas, they persuaded Congress to make it a national park.

The Appalachian Trail overlaps parts of the C&O towpath in this area and we saw several hikers with large backpacks, scraggly hair and worn walking sticks. 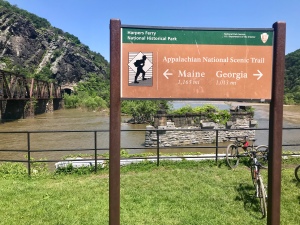 Seeing them reminded me of the movie, Wild, where Reese Witherspoon played Cheryl Strayed, who, devastated by her mother’s death from lung cancer and reeling from a divorce, embarked on a three-month, 1,100-mile hike along the Pacific Crest Trail – solo.

It also reminded us of another movie about the Appalachian Trail that we enjoyed – A Walk in the Woods, based on the 1998 memoir by Bill Bryson, starring Robert Redford, Nick Nolte and Emma Thompson.

The view from The Point where the Shenandoah and Potomac rivers fuse together in their final run to the Atlantic Ocean is gorgeous, though my photo doesn’t do it justice. 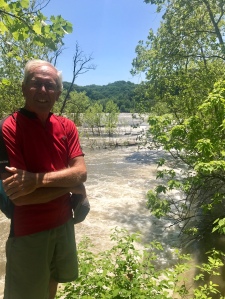 And the story of John Brown’s raid on the Harper’s Ferry armory in 1859 in effort to free the local slaves and spark a nationwide rebellion is captivating. 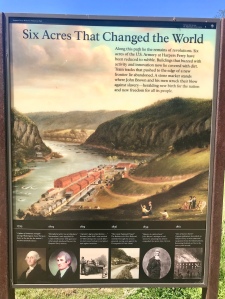 The actual raid failed, ending in tragedy for Brown and his supporters. Most were killed during the raid. Brown – a white abolitionist – was tried, convicted and hung two months later. But the raid and its aftermath helped focus the nation’s attention on evil of slavery and propel the country toward the Civil War.

The John Brown Museum in Harpers Ferry is a small old-fashioned museum that tells the story with an array of exhibits and three short videos. Also nearby is a Black Voices museum that speaks to the times.

West Virginia, it turns out, was never an enthusiastic supporter of slavery. I didn’t know this. Prior to the Civil War, this Appalachian region was part of Virginia. But it had long chafed against the state’s eastward emphasis, where slave-worked plantations and their owners dominated the Legislature and the state’s purse strings.

The footbridge over the Potomac runs parallel to the CSX Railroad track, formerly known as the B&O (Baltimore & Ohio). It’s a picturesque bridge, built in 1893, with the town of Harpers Ferry at one end and a train tunnel at the other end. (Hikers and those of us on bikes descend a spiral staircase just short of the train tunnel to resume our travels along the water’s edge.)

The following photos show the town at one end, the tunnel (if you look very carefully) at the other end and the train tracks through the chain-link fence. 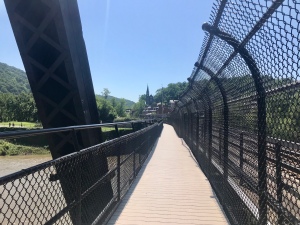 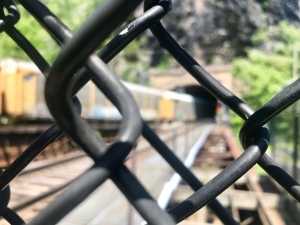 I waited on the footbridge to see what kind of caboose the train had and shot a short video of the end of the two trains passing me by on the bridge and disappearing into the tunnel.

So G and I finally got a taste of our long-awaited experience cycling on the C&O. It just whetted our appetite for more.

So here’s a thought: If all goes according to plan, we will have Casita-camped in all but seven (continental) states when we complete this trip. The seven missing will be in roughly this region – Arkansas, Missouri, Kentucky, Tennessee, Iowa, Illinois, Indiana. We may just have to do a repeat into West Virginia on that trip and make another run at biking this trail, from Cumberland to D.C.

Three nights on the trail (in B&Bs) and a return train trip to the Casita in Cumberland sounds pretty great to us. Perhaps the third time will be the charm when it comes to biking the C&O.

Definitely something to think about for … 2020?

2 thoughts on “The elusive C&O Canal”