Mom isn’t exactly sure when she and Lynn first met. Probably sometime in the late 1950s, when she and my father flew to Tucson from their Washington-D.C.-area home. Dad was to review one of the projects funded by a grant from his section of the National Institute of Health. The local project manager and his wife, Lynn, hosted them in their home for dinner.

And a friendship that has lasted more than 60 years was born.

We moved to Tucson a few years later, which is where I grew up. Mom’s friendship with Lynn deepened. Their children (me, Carolyn and Julie) played together. We all grew older.

Their friendship weathered many a storm as life’s challenges came and went. And it’s been elastic. Regular bridge games and crafting afternoons gave way to years of Christmas-and-birthday-only communication. Mom moved to Dallas nine years ago; a few years later Lynn moved from the Sonoran desert to Lopez Island on the Salish Sea northwest of Seattle to live near her daughter, Carolyn, and son-in-law, Bob.

It’s been six or eight years since they’ve seen each other. And it’s been nearly 50 years since Carolyn, Julie and I were together.

That’s when we all converged at Carolyn and Bob’s home on the northern tip of Lopez Island for a four-day reunion of sorts. Julie flew in from New York City where she works for an education consortium. It was a special time – as you can see from the happy faces of Lynn and Mom, both in their 90s enjoying a lunch a la Georges.

I love this photo, too.

To varying degrees, we all kayaked, hiked, reminisced and met new friends during our time together. Through it all, we ate very well. (Of course.)

One day, Carolyn and Bob invited neighbors Bruce and Debbie for dinner. Bruce is a retired chemical engineer; Debbie a retired biologist. They now farm on the island with herds of sheep and pigs. Both have pilot licenses and fly from island to island for pleasure and business.

We’ve been to wine tastings, and even to cheese tastings. But we’d never experienced a tomato tasting. That’s what we enjoyed as a dinner appetizer this particular evening, courtesy of Debbie’s tomato garden and complemented by Bruce’s eight-month Manchego cheese.

The crab legs in the bowl are from Bob’s crab pots, which G and I “helped” him harvest earlier in the day. (More about that in a bit.)

There were seven kinds of tomatoes, each just the right combination of sweet, firm and juicy – with distinctive flavors. I loved their names almost as much as the fruit: yellow brandywine, black prince, pink Berkeley tie dye, pineapple, copia, Cherokee purple and mortgage lifter.

Lynn and Mom kept an eye on G to be sure he sliced those tomatoes – with freshly sharpened knives – just right!

G was at home in the kitchen. 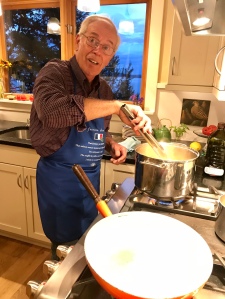 And we were all at home with the special shrimp and fettuccini dish he made. (Note Judy’s magic pan.)

It featured shrimp with goat cheese along with fresh crab and vegetables.

Here’s what G had done with the shrimp and crab shells as part of the prep (to enrich the sauce) earlier in the day. 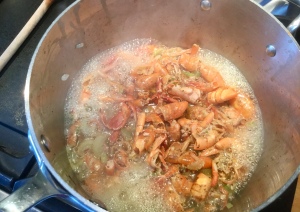 This is our festive group. Lynn is at the head of the table on the left (barely), Mom is next to her, then Georges, then Carolyn with Bob behind her, Julie at the other end of the table, then Bruce and Debbie.

The conversation was warm and fun. One of the joys of travel is renewing old friendships and creating new ones. By that measure, we are truly among the richest people on Earth.

To prove it, here’s a photo of Shoal Bay from Carolyn and Bob’s porch that afternoon amid a light drizzle. Note the rainbow.

Earlier in the day, G and I got in kayaks and followed Bob in his row boat out several hundred yards from their beach to his two crab pots in the bay. G is so photogenic….

Bob pulled his crab pots up one at a time. He had about a dozen crabs in the two pots, but just five that met the requirements. You have to toss everything back that’s not male, hard shell and at least six and quarter inches across the top shell. You’re allowed a maximum of five keepers a day.

Here’s a short video of Bob explaining the craft (as I struggle to keep my kayak in position for filming).

One night, we had this for dessert.

We’d not met Bob before. A native of Alabama but a longtime resident of the Pacific Northwest, he retired a few years ago from Boeing. Both G and I fell in love with him. He and Carolyn, an artist and retired school teacher, met roughly about the same time G and I met, some 18-20 years ago. Love is sometimes best later in life…!

Carolyn and I go way back. I remember sitting in the back seat of a car as an eight-year-old making up a story with Carolyn, who was probably about 18 at the time, about an 11-and-a-half-inch elephant named Ashmore and his friend, Chippy the squirrel.

Ashmore and Chippy lived under a tree and had all sorts of adventures with Mr. Blue Jay, Robinson Caruso, Winnie the Pooh and other furry or feathered friends.

Mom found the original manuscript in my handwriting from 1966 (and the blue-inked copy she typed up at the time) and brought it to Lopez Island for us to review. What a hoot! 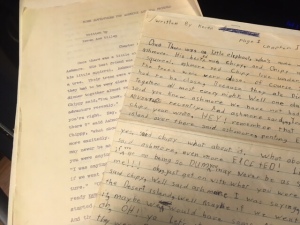 Years later, Julie and I would swim in the pool together, play dress-up and otherwise make mischief before Julie went off to boarding school. We remember always being relegated to the “kids table” whenever our parents had dinner parties….

Carolyn and Bob were great hosts and tour guides. One afternoon we went to Sunnyfield Farm, a family-run goat dairy on the island, and helped ourselves to the wonderful goat cheese and drinkable goat yogurt. There is an honor box; you just put the money in for whatever it is in the shop you take out.

Here’s a photo of a photograph hanging on the wall that I thought was adorable. 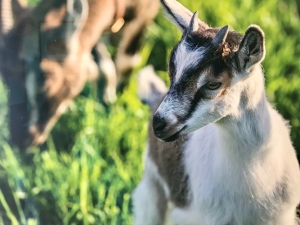 Here’s Andre standing next to a 17-ton truckload of hay just delivered to his farm.

You see a lot of signs across the island urging protection of the orca whales, whose population in these waters is dwindling. There are believed to be but 75 orcas left in the region. Hand-hewn signs across the island also express support for tragic Tahlequah, the orca who captured the world’s attention last month when she carried her dead calf on her back for 17 days before finally letting it go.

We stopped by the picturesque Center Church so Lynn could add some lovely maple leaves to her pressed-leaf collection.

Carolyn is “garden-sitting” for a neighbor who is traveling. Tough job, but somebody’s got to do it. 😊 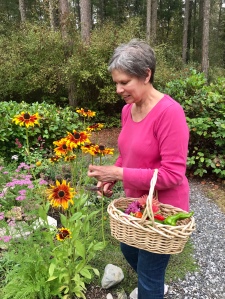 We also loved the produce at Horse Drawn Farm.

Lots of local meats there, too.

The property is farmed with horse-drawn equipment, hence its name. Here’s Mom posing with a tool she recognized from her days growing up on a farm in Ohio.

One of my favorite spots was Watmough Bay. It’s protected by an impressive coalition of conservation interests, including the Oles family, the San Juan County Land Bank, Lopez Island taxpayers, the federal Bureau of Land Management, the San Juan Preservation trust, the state Salmon Recovery Funding Board and Imogene “Tex” Geiling.

Check out the colors on the rocks lining the bay in this next picture. That’s Mom in the corner looking for the perfect stone on which Carolyn would later paint the perfect orca as a gift for the perfect house-sitter back home in Dallas (who loves whales).

Later we went to Agate Beach to continue the search. G joined the pursuit… 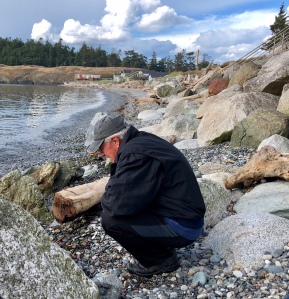 Don’t these other rocks remind you of speckled Easter eggs? 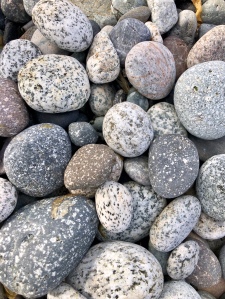 Such a lovely late-afternoon walk with Mom. 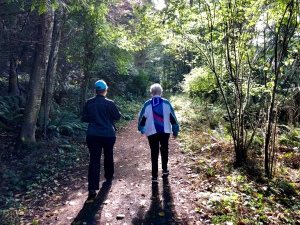 And dramatic landscapes in the late-afternoon light.

Here’s what the so-talented Carolyn did with the rock we selected. 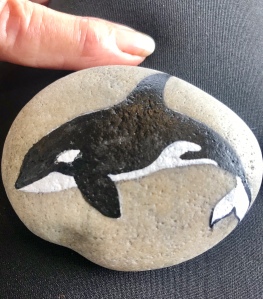 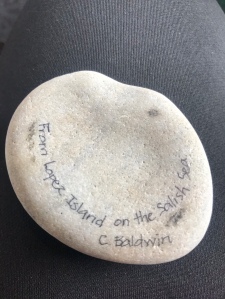 On our last day, we went to Upright Channel Park and walked along the beach to Flat Point across from Canoe Island. (Canoe Island is home to a French immersion language camp that I think G should chef for so I could brush up on my French, but that’s another story.) Mom led the way down the trail with G, Bob and me.

When we got to the beach, we saw raccoon tracks in the sand. 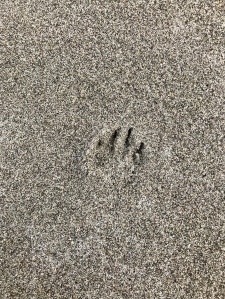 I’ve always thought it would be tough to live on an island, that I’d get the island equivalent of “cabin fever” and feel isolated and constrained. But Lopez Island is gorgeous, peaceful and friendly. The third-largest of the 170-plus islands and reefs that make up the San Juan Islands, it’s irregular shape is roughly 10-12 miles long and maybe 5-6 miles wide in its broadest places. It boasts a year-round population of about 2,400 active, fascinating people.

The population swells to about 7,000 in the summer, not counting the Canada Geese. (Note to self: It’s Canada [not Canadian] Geese.) Bill Gates and Paul Allen both own portions (or entire?) islands in the archipelago.

Lopez Island – 10 miles from the mainland at Anacortes and reachable by regular 40-minute ferries throughout the day – is named for Gonzalo López de Haro, the Spanish naval officer believed to be the first European to discover the San Juan Islands.

The weather would take a little getting used to. Warm and dry by Pacific Northwest standards, with average summer temperatures hovering around 70 degrees, it’s a good bit more rainy and humid than Dallas or anywhere in Arizona.

Still, Lopez Islanders are famous for waving at fellow motorists, cyclists and pedestrians on the island roads. It reminded us of home in Texas, also famous for the two-fingers-from-the-wheel greeting.

Even the Anna’s hummingbirds are social.

And the area is full of beautiful seascapes from Carolyn and Bob’s porch.

Here’s a sunset view from the same spot. We’re actually looking east from the northern tip of the island; that’s a sunset reflection you see. 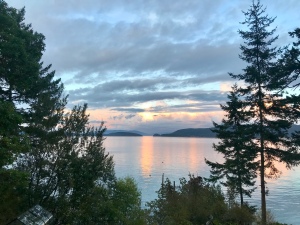 It’s a beautiful thing. As was our precious time together.

(Editor’s note: I’ve lost track of which photos were taken by Georges, Carolyn and me. Apologies. Photo credits all around.)