None of the photos in this blog post are enhanced. I swear. No filters deepen the colors, no dark room tricks enrich the contrasts.

I’m shooting just with my iPhone.

The majestic beauty of the Canadian Rockies is transcendental. 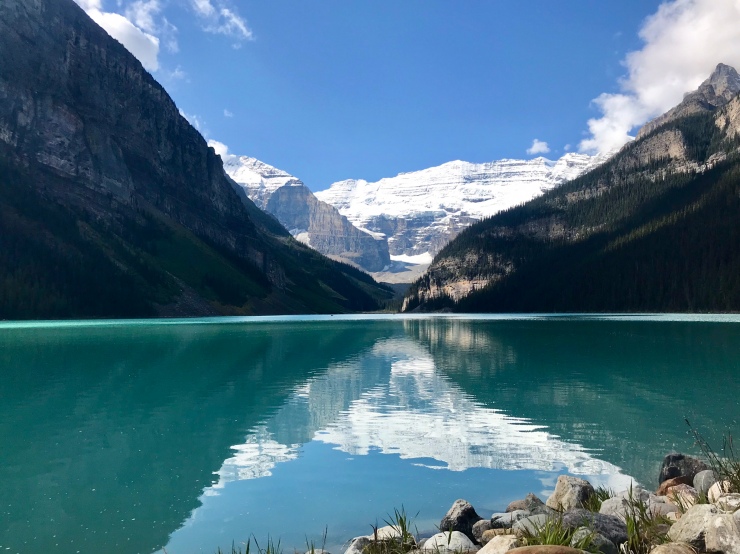 That’s a picture of Lake Louise in Banff National Park at about 11 a.m. one recent morning.

See what I mean?

It took us awhile to figure out the parking and shuttle process in this part of the park – even with kids back in school and recent wildfire trauma to the area we were shunted to overflow parking by 10 a.m. I’m glad we persevered.

Lake Louise is one of the most beautiful lakes we’ve ever seen.

Here’s another view of it from the patio of the Fairmont Hotel, before Georges and I embarked on the walk out to the far end of the lake and back, about three miles. (You can’t go all the way around; there’s no trail on the other side.)

And another one from about halfway out to the far side of the lake. 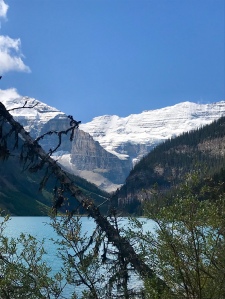 We spent five nights in or near three Canadian national parks last week – Kootenay, Banff and Yoho – and loved every minute of it.

Even when the temperature one morning when we woke up was below freezing outside!

Words don’t really capture the majesty of the Canadian Rockies. So this blog post will be more about showing than telling.

We spent our first night in British Columbia along Lake Enid, just outside of Kootenay National Park, six miles down a dirt road at a location recommended by one of our favorite websites – freecampsites.net.

Somebody had clearly spent considerable time at the campsite we settled on. It was at the top of a small hill. That’s a small vegetable garden in the planter box in the lower right-hand corner of this photo – complete with perfectly formed carrots ready for picking (which we left for those who planted them).

And check out the flower box. 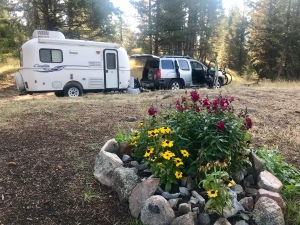 Here’s a house – the only house – we passed on the way into Lake Enid on the dirt road outside of Invermere-Wilmer. 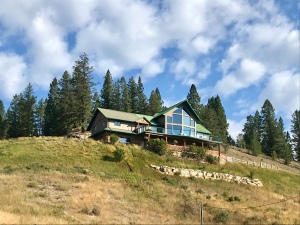 Earlier that day, we’d passed Columbia Lake. This is where the Columbia River originates … and then empties into the Pacific Ocean some 1,500 miles later at Astoria, Oregon. The spring-fed lake is the fourth-largest river system by volume on the continent; it has the greatest flow of any North American river entering the Pacific.

Here’s the view through our windshield of the hoodoos we passed heading north from Columbia Lake. 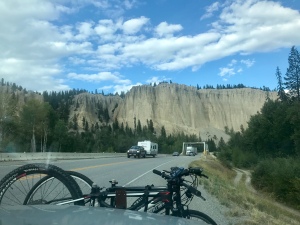 There are lots of natural hot springs in this area.

Amazingly, these mountains aren’t much higher than Guadalupe Peak in Texas; they’re roughly comparable to Mount Lemmon in Arizona. But they seem taller. The difference is their steepness and the fact that we are so far north. The vegetation doesn’t go to the top, and the trees are different – at least those below the treeline. There are only pines here, with an occasional aspen.

Our second night we snagged spot J6 in the Marble Canyon campground in Kootenay National Park. We stayed two nights in a spot with full sun (critical for our solar panels when there are no electric hookups). We were surrounded by pine trees and enjoyed a lovely view of the mountains encircling us.

Here’s a shot from the drive in.

And here’s a shot of the Kootenay River near our campground (which I used as the lead-in photo to the post before this one about out third border-crossing experience).

We walked up Marble Canyon late that afternoon.

I love the signature red Adirondack chairs that Canada places at key viewpoints in its national park system – from Nova Scotia to British Columbia.

Here’s a short video of the water rushing through Marble Canyon.

We got a hike in the next morning before it poured rain. Then, we huddled in our Casita. It was fun to alternate between reading books, watching it rain and sipping hot chocolate.

That night we used our gas heater for the first time on this trip. G’s homemade French onion soup never tasted so good. I wore long-johns to bed.

The next day we crossed the Continental Divide for the second time on this trip. (The first time was in Montana’s Glacier National Park.) We can see more glaciers here than in the United States – Stanley Glacier is impressive! – probably because we’re further north.

And we crossed into Alberta, our seventh Canadian province on this trip, to experience Banff National Park. For a brief time, the rain turned to melted snow on our windshield. And it was only Sept. 3!

We spent a couple of hours at the visitor’s center in downtown. They have great wifi. I called Mom in Dallas and did some email catch up. Then we walked around town.

This is the park’s administration office.

Here’s the view from the administration office grounds looking back at downtown Banff and Cascade Mountain beyond. 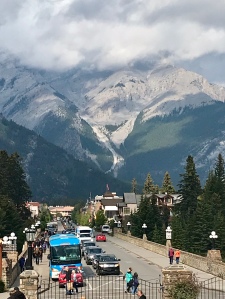 Then we walked a couple of miles along the Bow River with the distinctively “cut” Rundle Mountain the background. We’re told that’s the most popular tattoo shape in Canada.

We enjoyed a beer flight and local cider at the Walheim’s Pub just below the hotel.

I couldn’t take my eyes off the mountains.

We overnighted on the street around the corner from the visitor’s center. It was perfect. The next day we drove to Lake Louise.

Here’s another shot of that fabulous lake, looking back at the Fairmont Hotel here from the end of the lake.

We watched a couple of rock climbers scale the steep walls of the canyon. (Sorry, no long lens; can you find the three climbers in this photo?)

I took this shot from inside the hotel, at the bar, looking out over Lake Louise.

Here’s another shot of Lake Louise – behind G and me. 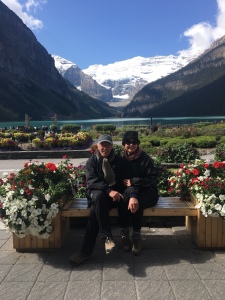 I wondered about scale. The Colorado Rockies and the Appalachian Mountains, for example, are also magnificent. You can see by this exhibit in the visitor’s center that they all pale in comparison to the Himalayas, Andes and European Alps.

The visitor center here is quite good. The geological explanation for this area – G says it’s the best so far in our Year-on-the-Edges-of-America travels – reminds me of Bob Dylan’s Blowing in the Wind that Peter, Paul and Mary made famous in the 60s.

How many years can a mountain exist, before it is washed to the sea?

The answer, my friend, is blowing in the wind.

The answer is blowing in the wind.

The real answer, according to this exhibit, is 400 million years.

Banff National Park is home to the southernmost population of Alberta’s Woodland Caribou. They are an endangered species. We didn’t see any, except in museums.

Caribou seem to me to be a cross between deer and elk. They are ideally suited for their lifestyle in the cold. They have large feet, for example, which act as snowshoes. And they have thick hair on their muzzles to protect them from cold when digging through snow. Unlike deer and elk, however, caribou eat slow-growing lichen.

Later, we visited Castle Mountain, where we learned about Canada’s internment camps during World War I. According to the information plaque, Canada entered the World War I against Germany, Austria, Hungary and Bulgaria in August 1914. At that time there were more than a half-million people originating from those countries living in Canada. They’d been invited to Canada to work as laborers to construct roads and railways and to work in forestry and agriculture.

But the Depression of 1913 put large numbers of these men out of work. In response to public fears of enemy subversion and civil unrest, the government imposed the War Measures Act, which reclassified these workers as “enemy aliens” and required them to register and report monthly. Those who failed to report to work were imprisoned.

As a result, nearly 8,600 men became prisoners of war in 24 camps located across Canada from 1914-1920. Most were foreign nationals, a few were British subjects or Canadian citizens. The majority were noncombatants, unemployed civilians. They were the victims of racial prejudice and war hysteria.

(I knew the U.S. government had shoved thousands of Japanese-Americans into internment camps during the horrors of WWII, but I knew very little about such actions in WWI. A little googling revealed that the U.S. also reclassified German nationals within its boundaries as “enemy aliens” during this time frame. We’re talking 250,000 residents. Some 6,300 residents were arrested, thousands more interrogated and investigated. About 2,000 were incarcerated.)

Soon we crossed the Continental Divide for the third time in 13 days. Then we entered Yoho National Park and found ourselves back in British Columbia. We stopped at the Spiral Tunnels viewpoint to watch one of the many daily trains do a complete figure eight along and inside the steep mountain.

This railroad has an interesting history. Originally built in 1884, the “Big Hill” through Kicking Horse Pass was notorious for its 4.5 percent grade – the steepest section of mainline railway on the entire continent. It was so steep that when a five-car train descended it, according to the information plaque, the front of the locomotive was five meters (more than 16 feet) below the rear of the train.

The pass became a railway man’s nightmare. Finally, in 1909 a new “spiral route” was built. It is twice as long but half as steep. G and I watched a train with some 175 cars serpentine its way along and in-and-out all three levels at once.

My photo here doesn’t really do it justice. (There are actually three sections of the train visible at one time, the third at very bottom below, barely/hardly visible.)

Later, we hiked to Takakkaw Falls. It drops over two narrow plunges that are hidden within the canyon near the top. The river then cascades down a narrow channel with two steps for a total drop of more than 1,100 feet.

That’s seven times the height of the Niagara Falls!

The name of the falls means “it is magnificent” in Cree. The Daly Glacier feeds the falls. I loved this description on the plaque: “In summer, the rock face roars with the plunging mountain torrent. But in autumn the melt is slowed, and by winter the raging falls narrows to a ribbon of ice awaiting summer to set it free.”

And of course the scenery as we returned to our campsite at dusk was gorgeous.

Dessert was delicious too.

The next day we stopped at another gorgeous glacier creation – Emerald Lake, also in Yoho National Park. We spent a couple of hours walking around the entire lake, probably 3-4 miles. 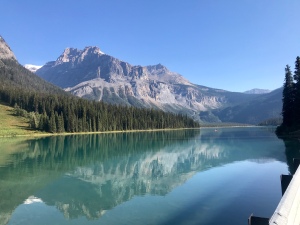 Here is the bridge that you walk over to get to the Emerald Lake Lodge.

The milky-blue coloration is distinctive throughout these national parks. It is caused by glacial silt from nearby glaciers. (Look closely and you can see a canoe in the middle of the lake.) 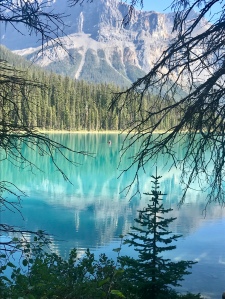 And here’s a short video of the view from the far end of the lake at the alluvial fan at the far end.

We learned that this is the site of the Burgess Shale, discovered by Charles Walcott in 1909, a renowned geologist and head of the Smithsonian institution. Walcott’s find yielded a startling variety of well-preserved softbodied marine animals. The site remains the world’s most important Cambrian-age fossil site, according to the information panel, and continues to play a pivotal role in our understanding of the emergence of early animal life.

From there we drove to the Natural Bridge for more photos, including of Mt. Dennis and Mt. Stephen, 8,041 feet and 10,495 feet in elevation, respectively.

I couldn’t get enough of that distinctive aqua-colored water.

15 thoughts on “The grandeur of the Canadian Rockies”