We spent nearly a week recently in the urban oases from St. Petersburg to Naples on the southwestern coast of Florida and had a delightful time exploring them by bicycle.

But we got off to a rocky start.

Last time we were in St. Pete, nearly two years ago, we spent most of our time in the downtown-Vinoy Park area and loved the Salvador Dali Museum. This visit we devoted ourselves to a more out-of-doors experience.

We had parked our Casita in a vacant lot in Seminole near the much-celebrated Fred Marquis Pinellas Bike Trail (named for a parks-loving former county administrator) and took off on our bikes to experience the northern portion of the 45-mile trail.

Or so we thought.

Truth be told, we were five or six miles into the ride before we realized we’d actually headed southeast instead of northwest on the Pinellas Trail and that we were nowhere near our desired Honeymoon Island State Park destination.

Darn. So much for relying on instinct when it comes to a sense of direction. We should have consulted Lucy (our nickname for the voice on Googlemaps) earlier.

No matter. Exercise is always good and we made a slight course correction that took us – by design – over to Treasure Island instead.

We pedaled several miles along a paved path on a nearly deserted beach, which provided great scenery. Then we rambled up Gulf Boulevard and over the draw bridge at Johns Pass. Even better views – of the Gulf to the left, Boca Ciega Bay to the right. We were hungry (and thirsty) by now so we stopped for lunch at Sculley’s Boardwalk Grille.

The place was jammed. We snagged two good seats outdoors and watched the tour and parasail boats come and go as the laughing gulls shouted instructions and the American brown pelicans directed traffic.

Then we pedaled on up through Madeira Island, across Redington Beach, Redington Shores and Indian Shores before heading inland (east) again to complete our loop.

We found our trusty Xterra-Casita steed waiting for us just where we’d left her in Seminole.

The next day we would pick up where we left off, but first we needed water. We’d been boondocking for several nights and were down to less than a quarter of our 25-gallon water tank. The first several gas stations we went to had air but no water, and there weren’t any handy truck stops in the neighborhood – so we got creative.

We stumbled upon Walsingham Park, a beautiful county park with a deep-blue lake speckled with white egrets and ibises. It has several group ramadas with water faucets. It took all three of our water hoses screwed together to reach the faucet from the parking lot, but reach they did. Our tank was full within minutes and that gave us the peace of mind to set off on another Pinellas Trail bike adventure. 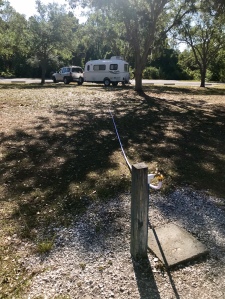 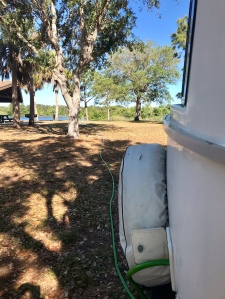 This time we did what we meant to do the first day, which was pedal up the Pinellas Trail through Indian Rocks Beach, Clearwater, Dunedin and out to Honeymoon Island State Park. This time we succeeded. Here’s a picture of the view from one of the lovely houses just blocks from downtown picturesque Dunedin.

The homemade sandwiches in our fanny packs were especially tasty along the way, and the ice-cold water fountains at the Visitors Center at Honeymoon Beach especially welcome.

The beach on Honeymoon Island, which, by the way, used to be called Hog Island due to the local porcine population (no longer evident), was the most crowded beach we’d seen so far, and on a Thursday afternoon, no less.

On Friday, we packed up and headed south to Sarasota for breakfast at the Green Zebra Raw Bar and Cafe just off St. Armand’s Circle. I had the Famous Raw Pancakes (dehydrated bananas, coconuts, nuts, hemp, chia and flax – topped with whipped cashew cream, strawberry chia coulis and fresh fruit). Georges had the special Tex-Mex Scramble. Both were delicious. Hat tip to good friend Mary Beth in Dallas for the suggestion!

Then it was off to Sanibel Island, where we checked into the lovely Periwinkle Park and Campground. I enjoyed the exotic bird collection as I did laundry and Georges puttered around the campsite. We had French Canadians on one side and a German-speaking mom of two teenagers from New York City on the other side; very international clientele.

Our sunset walk out to the beach was delightfully devoid of mosquitos. Check out this ornate and expansive sandcastle, architect unknown – not sure it survived the high tide that night…..

And here’s Georges enjoying an evening on “our patio” with our strand of hummingbird lights providing a little eye candy. 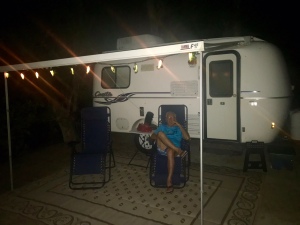 We bicycled nearly the entire island the next day, starting with the iconic lighthouse, for which Sanibel is so recognized, and then heading west.

A special delight was the Ding Darling Wildlife Preserve, where we attended a lecture on alligators and crocodiles (more on that in a later blog post) and I snapped to an anhinga just 10 yards off the paved park path. I quickly laid my bike down, grabbed my iPhone camera and clicked away. Three cars stopped behind me to do the precisely the same thing.

My anhinga was quite the preener. He held his head high this way and that to assure that we all got a good look at the resplendent hair on the back of his neck; Fabio couldn’t have been any more showy. And his liberal use of turquoise-blue eyeliner was stunning, a clear indication that mating season was still in progress.

I wish I’d had my old Canon with the long lens, but here’s the best I could do with my phone: 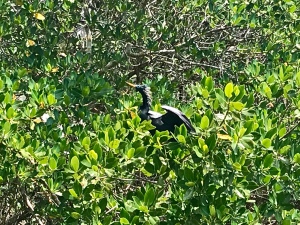 I’d seen only a couple anhingas prior to this one and only in the distance; until this day in Ding Darling, I was ignorant of just what a sexy bird they are.

Hat tip to good friend Miriam of Kansas City for the Sanibel recommendations!

That evening we enjoyed a wonderful aperitif with Enid and Mario of Saguenay, Quebec, and their visiting friends, Ghislaine and Philippe. They were as curious about our travels and experiences as we were about theirs. It turns out that they run an auberge about three hours north of Quebec. And Enid is the chef.

Here’s a picture of Enid and Mario and their 1974 Westfalia van, with customized inscription quote from famed Belgian musical poet, Jacques Brel, stenciled on the window. (You can see it in French in the first shot; the English translation is in the second shot.) 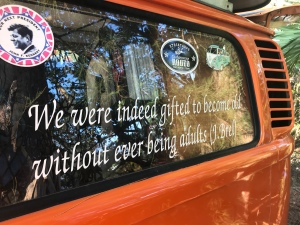 It looks like we may need to detour north a bit when we hit Quebec in July. What fun it would be to reconnect on the other side of the St. Lawrence River at L’Auberge des Cevennes!

In the meantime, we’ll motor further south, through the Naples Botanical Garden, to the remote areas of the Big Cypress Swamp National Preserve and the Everglades National Park…..

6 thoughts on “Pedaling across St. Pete – and beyond”