Sixty-plus years ago, my mother and father built a large one-room Quonset-hut style cabin on a 20-acre parcel of land in northern Virginia surrounded on three sides by the Shenandoah National Park.

They were happy young-marrieds and did everything themselves, starting with the small model they built from balsa wood that sat on a table top in their Bethesda, Maryland home. Later, they rented a boat trailer to haul lumber and steel beams left over from WWII from a military surplus store to their property. These were the foundation of what would become “The Cabin” nestled deep in the forest about 90-minutes away, 10 miles south of Front Royal, Virginia.

It took lots of weekends and vacation time, but the Cabin was fully inhabitable by the time I came along couple years later. I have clear memories as a pre-schooler of walks in the forest, watching it rain from the picture windows along one side of the cabin, catching fireflies and sucking honeysuckle vines, treks to the outhouse, and enjoying “story time” behind the scroll-down screen shielding my bed from the living room.

I helped in the final stages of construction, of course. My job was to make sure the water didn’t stay inside the pail. 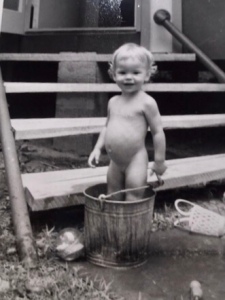 When the power company cleared a miles-long, 80-foot swath into the property to extend power to the Cabin, my parents used the open space to plant several acres of Christmas tree seedlings. They even erected an above-ground swimming pool, powered by a small electric pump that pulled water from the nearby Lands Run cascading stream.

Then we moved to Arizona, which is where I grew up.

And Dad sold the land and the Cabin to a dear friend from college who lived in the area.

It was the right thing to do. No way my folks could maintain the Cabin and the property from thousands of miles away. But I didn’t appreciate that then. The Cabin symbolized happy and adventurous times to me. I was so mad that as a 10-year-old, I didn’t speak to my dad for two weeks.

Thankfully, Dad’s dear friend has allowed me to visit the Cabin upon request. The four exquisite days we just spent camped in our Casita less than a quarter-mile from the Cabin was the most time I’d spent there in a half-century.

Memorial Day weekend for me this year was quite a walk down Memory Lane.

We weren’t sure we could get the Casita across the narrow bridge my folks built over the stream so we parked, with permission, on a neighboring property.

It’s a marvel that this bridge, with mostly original materials, still stands as noble sentry to the Cabin. Here’s what it looked like in the beginning.

This was the first car to cross the bridge. You had to be careful to line your tires up just right!

Note how the trees have grown around the cables my folks used to double-secure the bridge.

This is a photo of Mom standing on the bridge with the tractor she’s using to transport steel beams across the stream and up to the site of the Cabin to be used as its foundation, circa 1956.

And this is a photo of Dad standing on one of those foundation beams.

I think this is Mom, setting the frame for the Quonset-hut-style Cabin.

And here’s a shot of Mom, at left, getting some help from neighbor-friend Hannah, a Holocaust-survivor whose artist-husband, Charles, another Holocaust survivor, painted the picture of me as a child that still hangs in my mother’s living room in Dallas. (I’m not sure who the girl to the right is in the photo.)

Georges and I spent our first evening inside the Cabin with Dear Friend, his wife, and a visiting grandson, Peter, freshly graduated from Pomona College soon to head off on a Peace Corps mission in Central or South America.

So much, surprisingly, was exactly as I remembered it, including the main living area in front of wood-burning Franklin Stove.

I remember spending hours staring out picture windows that lined one side of the Cabin. Somewhere we have old pictures of me “reading” my picture books there. This visit they were good for bird-watching and a little rain-watching.

The bed my parents slept in is in exactly the same place. I recall being allowed to sleep in it when I was sick.

The kitchen had running water from the stream, a small fridge and electric stove. Today it looks pretty much the same. (There’s also a small shower in the pantry/closet area off to the left side.)

I had a small bed off to the side of the living room. My parents would roll down the screen attached to the ceiling to shield the light when it was time for me to go to bed. 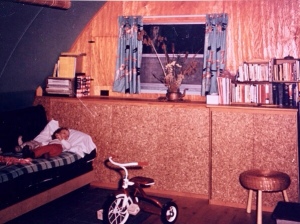 Here’s what the bed looks like now, complete with roll-down screen. Could it possibly be the original?

The model of balsa wood, which started it all, is now a wall decoration, hanging just to the right of the fireplace. 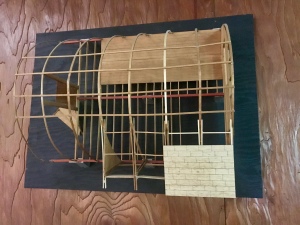 Georges and I were blessed while there to enjoy a short concert by Peter, an accomplished violinist with a repertoire ranging from Virginia-style fiddling to Bulgarian Folk Music to American and Irish lullabies. Here’s just one example of the former.

My mother in Dallas found and emailed me three photos I’ll bet Peter will get a kick out of. They feature his father, circa 1959, holding what looks like a plastic boat of some sort, playing in the kiddie pool with his sister, Peter’s aunt, and me. (I’m the toddler on the right in the first two photos, the one on the left in the last one.) 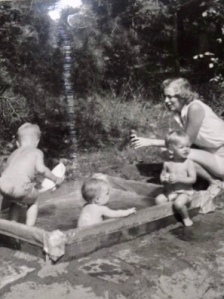 This time was precious to spend inside the Cabin, made surreal by the music and memories….

Sometime about dusk, G and I walked to our Casita nearby where we fell asleep to the sound of Lands Run cascading waters, and the others left to return to their home in the city.

We spent three more days camped in the area. I cherished every moment. 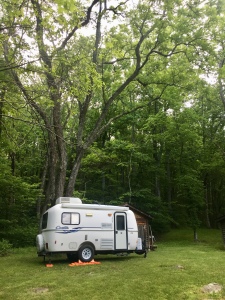 We hiked in the woods, marveled at the views from the famous Skyline Drive across the crest of the Blue Ridge Mountains through the Shenandoah National Park, revisited the Cabin property and spent hours birdwatching during the day and firefly-watching at night.

It turns out that since we moved away, the park service expanded its boundaries. The Cabin is now surrounded on three of its five sides by national parkland; Dear Friend’s property access is grandfathered in. 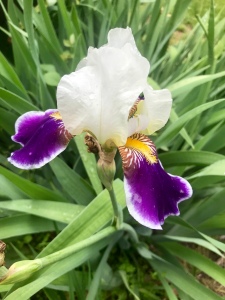 Back at the cabin, I noticed the special knob on the door is still there. My folks attached this knob near the bottom of the screen door of the Cabin so I, as a small one, could open and close the door from the steps by myself.

That knob has served generations; Peter told me he remembers using that knob, never knowing its origin.

One day years ago, Dad and I took the trash out to the side of the cabin. Somehow we stumbled into a nest of Yellow-jacket wasps. We ran howling back into the Cabin. Mom put baking-soda paste on our stings. I had seven; Dad had more.

This is the site of the Attack of the Yellow-jackets.

Here are photos of the privvy I remember so well. Note the window with curtains. They can be pulled back for enjoying the view while … using the facilities. (Or you can keep them closed, if you prefer, for privacy amongst birds, raccoons, skunks and other local critters.)

I’m sure this is the only privvy in Warren County with a picture window. 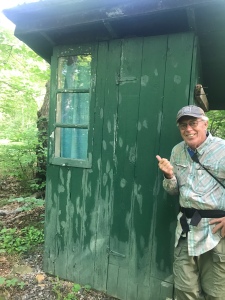 Here’s a shot of the privvy back in the day. That’s my mom showing it off through the open door.

The Christmas trees are pretty much gone. Dear Friend helped plant them, and they provided a half-century of celebratory trees, one at a time each year, for his family.

The pool still stands. Here it is today, just lacking a bit of water.

And here are a couple of shots from yesteryear. That’s me and my parents. In one of them, Dad is holding my black blow-up seal-shaped floaty. 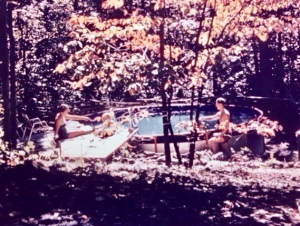 These memories are precious. My parents divorced a couple decades later; my father passed away in 2010.

But G and I did more than just sit around and reminisce. One day, we hiked up the Fire Road from the Cabin to Skyline Drive. It’s about a two-mile hike, relentlessly uphill, past an 80-foot waterfall that isn’t prominently marked on National Park literature. 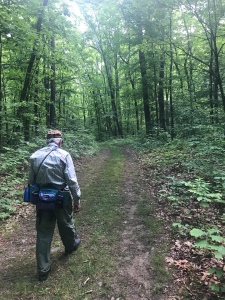 Here’s a short video of the water rushing down Lands Run Falls.

And this is the marker off Skyline Drive at the upper end of the hike from the Cabin, noting the trailhead down to the falls. 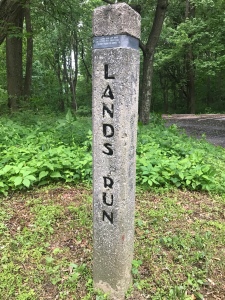 Another day, we cruised Skyline Drive through the park. Here’s a photo from the view looking generally east from near the northern end of the 100-mile scenic byway. 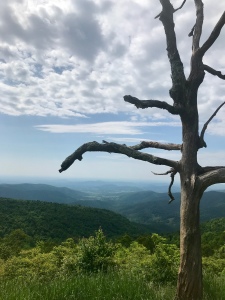 And here’s the view looking generally west from just a few miles further down the parkway. (Note the blue haze to many of these photos. It’s caused by isoprene, which is produced and emitted by certain trees and gives the mountains their distinctive color. Major producers of isoprene are oaks, poplars, and eucalyptus.)

This is a “hitchhiker” we passed along the way.

We hiked the Stony Man Trail at Milepost 41 and marveled at the nearly 360-degree views.

Later, we hiked to Dark Hollow Falls from MP 50. It was more crowded; we managed to get back to our car just as the rain started. 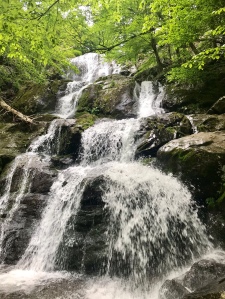 We also did our fair share of birdwatching – and listening – while camping near the Cabin. We fashioned a bird feeder from an empty plastic club-soda bottle.

Here’s a partial list of the birds we think we saw, or heard, in the area:

We sent this photo to good friend Bill in McKinney, Texas, and he informs us that it is likely of an Eastern Tiger Swallowtail, black morph, making it a female.

I’m guessing this is more blooming Mountain laurel, which is sprinkled through the forest in defined areas. A lovely “stripe” of these white blossoms bisected the green-forested trail to Lands Run Falls.

Of course, we also put our feet up and did some relaxing. 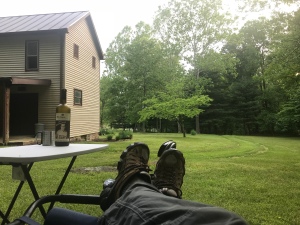 And we worked up quite an appetite with all that hiking, watching and listening. So here’s what we did about that.

All in all, it was just about the best four days imaginable. I’m thankful to my multi-talented parents for their creation of this haven of happiness and to Dear Friend and his family for drawing such joy from it across generations. 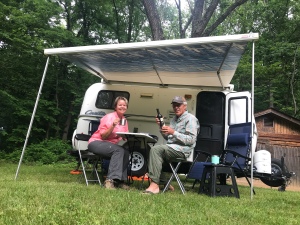 Oh, Shenandoah, I long to hear you.

Look away, you rollin’ river

Oh, Shenandoah, I long to hear you

Look away, we’re bound away…