We recently spent an eerie three days in the backwoods of Big Cypress National Preserve and the Everglades National Park. We loved the experience – the wildlife was especially abundant! – but the landscape was surprisingly stark, almost oppressive. 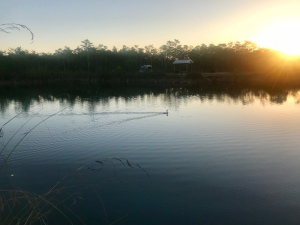 I confess that I didn’t realize there was both a Big Cypress AND the Everglades. I guess I’d blurred them in my head into being one and the same – both down in the hot and humid southern tip of Florida somewhere.

In fact, the Everglades is a national park, a designation that restricts what sorts of uses and activities can occur within the park, which was created in 1947. The Big Cypress preserve wasn’t created until 1974. Its designation is less restrictive, allowing oil and gas exploration and extraction, hunting, off-road vehicle use, private land ownership, as well us customary uses by the Seminole and Miccosukee native people.

The “river of grass” flows roughly through Big Cypress into the Everglades and out to the Florida Bay, but that river is barely a marsh in many places. South Florida is one of the fastest growing regions of the country and the water for all that development along the state’s beautiful coastlines has come largely at the expense of Big Cypress and the Everglades.

It’s weird that a wetlands can look so dry. Granted, we visited in the spring, before the seasonal rains of summer. Still, the miles and miles of sawgrass prairies are surprisingly brown, even as their roots are in water or within a few yards of water. If you didn’t know it was spongy marshland, the expanse of dried-out-looking sawgrass looks a lot like the grasslands of eastern Wyoming in the summertime. 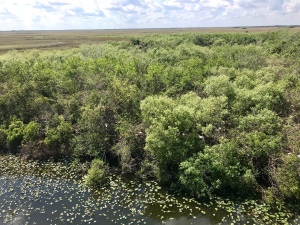 And the nights. So dark.

We didn’t realize how accustomed we’d become to the ordinary light pollution of urban areas until we stayed two nights in the Midway Campground in Big Cypress ($15 a night with a national senior pass, electricity/no water hookups). Here, when I woke up in the middle of the night, it didn’t matter if I felt my way to the bathroom with my eyes open or closed – the visibility was precisely the same. (Unless I succumbed to turning on the light in the Casita bathroom, and risked waking Georges up.)

This is one of a dozen or more alligators we saw at the Big Cypress Oasis Visitors Center: 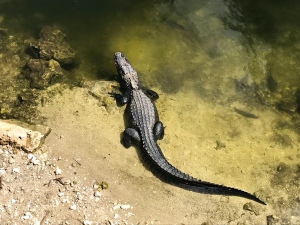 This is one of the dozens of roseate spoonbills we saw in the Everglades: 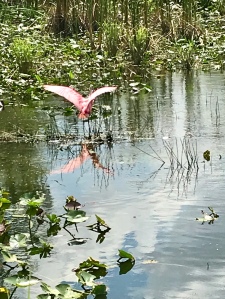 We did a 15-mile bike ride through Shark Valley in the Everglades. It took us more than two hours to do the first seven miles because we had to stop every 10-12 pedals to ogle another alligator or marvel at another great blue heron. 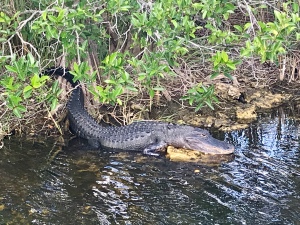 At one point, a gator ambled lazily across the bike path about 20 yards in front of Georges. The gator kept an eye on Georges; and G definitely kept an eye on him. It amazes me that people actually tent camp in Big Cypress and the Everglades!

Instead of the “lions and tigers and bears, oh my!” mantra of The Wizard of Oz, I had in my head “gators and geckos and birds, oh my!”

Here’s a gecko who greeted us at the Ernest F. Coe Visitors Center in the Everglades: 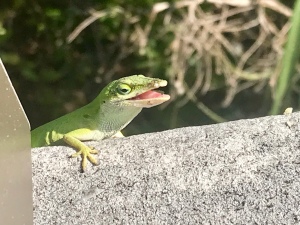 We had recently attended a lecture at the Ding Darling National Wildlife Refuge on Sanibel Island by a docent named Allen about the differences between alligators and crocodiles. Allen is a retired school teacher from Michigan who lives in North Carolina now but winters on Sanibel and clearly relishes talking about giant lizard-like creatures. We snagged his last lecture of the season and learned:

• American crocs range from South and Central America to just the southern tip of Florida, e.g. the Everglades. They like the warmer temperatures and saltwater. It’s rare to see a croc in the U.S.

• American alligators range from Texas to North Carolina, including the tip of Virginia and parts of Arkansas. They’re OK with the cooler temps and prefer freshwater.

• Alligators generally eat about once a week, sometimes they go for months without any gastronomical fortitude. The reason they seem to be sunning themselves all the time is because their body needs to have an internal temperature of at least 68 degrees to digest food, so they’re soaking up the sun in the day time to get them through the nights….

• Crocs show both sets of teeth and look more menacing; alligators tend to show only their upper teeth. Alligator heads are more curved, usually all you see above water is the nose and the eyes.

• Alligators can live 50 years and they typically go through 30 sets of teeth. 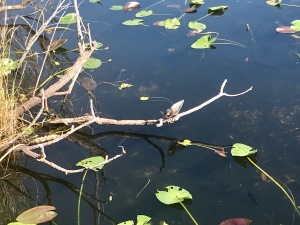 At one point we watched an elegant GBH survey his kingdom, with a head attitude resembling the haughtiness of a llama, while various fish plop-plopped one after another across the pond in front of him, as though to taunt His Royal Pomposity. At first, we couldn’t tell if they were fish or turtles or what, so rhythmic were their plop-plopping. It was like Morse code across the pond … or maybe a poorly choreographed, not-ready-for-the-Olympics-yet synchronized swimming routine.

We climbed to the top of the Shark Valley observation tower for a great view. It was New York City for the egrets and ibises; they were stacked five deep in some trees. I couldn’t really capture their density with my iPhone. My best attempt included Dominique and Laurent from San Francisco in the foreground…. 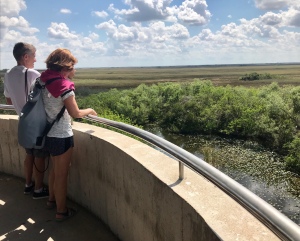 Dominique and Laurent are from France. They’ve lived in San Francisco for more than a dozen years and with their two teenagers on school- and service-related trips of their own, they were on their first vacation together, just the two of them, in 16 years. We enjoyed chatting about the weather, politics and travel with them as we munched sandwiches from our fanny packs. They invited us to call on them when we’re in the Golden State this fall, and we just might….

On the eight-mile pedal back to the car, we spotted a tri-colored heron (life bird, see photo below) an adorable brownish juvenile ibis with white spots on its back, more roseates, and a night-crowned heron.

I have to say that my favorite picture from this leg of our journey, however, is this one of Georges. It took more than five weeks into our yearlong vacation adventure for him to sit still long enough to drift off to sleep in one of our zero-gravity chairs, but finally he did. 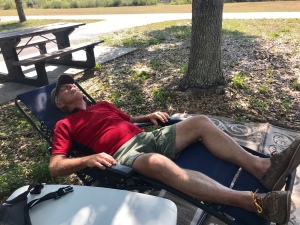 He can still drive me nuts. As we crossed a small pedestrian bridge on the Anhinga Trail in the Everglades, G sprayed a bit of water from his water bottle onto the back of an alligator not six feet below. Yikes! All the signs say it’s a $5,000 fine to “feed or disturb the animals.”

Me: “You shouldn’t do that; you’re such a little boy.”

An eerie fog settled over our pond at Midway Campground the morning we left for Flamingo at the southern-most tip of the Everglades. Visibility: Treetops, barely, and two alligators in the pond. 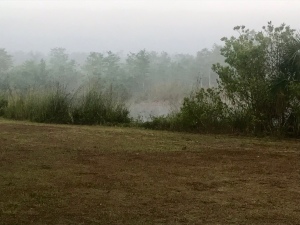 It was 90 degrees with 90 percent humidity by the time we arrived at Flamingo around noon. A sign in the visitor’s center – available for purchase – said this is a place where “you can swing a pint cup in the air and get a quart of mosquitoes.”

Another sign said the area was currently on the lowest of mosquito alerts, in a category called “enjoyable.” I beg to differ; G and I have managed to provide fine dining for a number of mosquitos recently, so I would up the category a couple of notches to somewhere between “unpleasant.” And “bearable.” 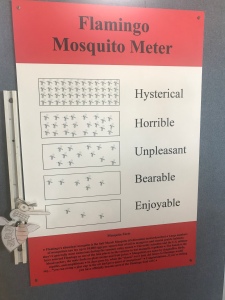 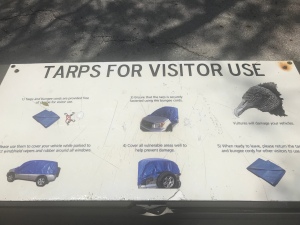 Flamingo was really a rather desolate area. Damage from Hurricane Irma last September is still sadly evident; only one set of bathrooms is in working order – not the ones in the Visitors Center. The campground amphitheater and pier are destroyed and the picnic area looks like the face of the Moon with rows of lonely picnic benches lined up. We didn’t see any flamingos, either.

Still, just as we were leaving, we noticed a small gathering of people around a corner of the boardwalk behind the marina bathrooms. We hustled over to see what the fuss was about and what do you know? It was a crocodile – not an alligator – hunkered down in the swampy waters. 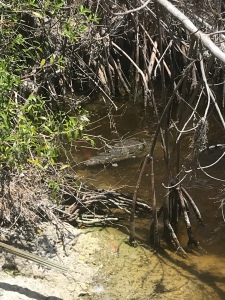 He was shy and hard to get a good picture of with my phone. But you can see his pointy snout, and two sets of teeth! Great punctuation point at the end of our Cypress-Everglades adventure.

Now it’s on to the Florida Keys….