Our Nissan Xterra was positively exuberant the day we spent exploring the back roads of Big Bend Ranch State Park.

You’ve had me pull that damn trailer all over tarnation for the last year, and now – finally! – I get to do what I was made to do: 4-by-4 adventuring.

Now I can show you my stuff.

Yes, for months now we’ve asked our automotive cutting horse to serve as a saddle horse. But on this day, we left our Casita at our lovely and secluded campsite in the Arenosa Campground along the Rio Grande and spent some one-on-one quality time with our 10-year-old Xterra – seven hours bumping along into the inner reaches of Texas’ largest state park.

And what a ride it was. 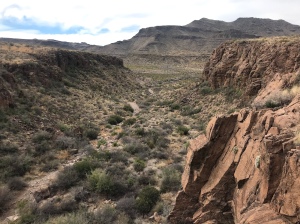 We’ve been to the Big Bend area many times. It’s one of our favorite regions; the scenery from the top of the Chisos Mountains is second only to that of the Grand Canyon in Arizona.

But we’ve spent most of our time in Big Bend National Park. We’d only driven along the southern edge of the neighboring Big Bend Ranch State Park and done a couple of hikes in it (up to Rancheria Falls and down to Closed Canyon).

That southern drive along FM 170 between Presidio and Lajitas is smooth, winding and beautiful. Every time we do it we like it even better than the last. 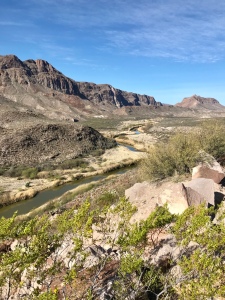 And on this trip, the Texas bluebonnets were in full bloom – in February! (Georges even created a new song to sing as he drove. It’s called Shavin’ in the Lupin!)

This time, though, we took the time to drive up into the 300,000-acre state park. You enter from the west. The only way in is via dirt road, some of it steep and rocky. A high-clearance vehicle is a must. 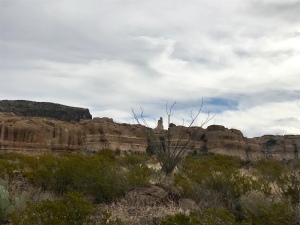 It’s 27 miles back to the Sauceda Ranger Station and then another eight or nine miles further in to the park’s signature geological feature – El Solitario, a collapsed and eroded structural dome that stretches nearly 10 miles across. Then you turn around and go back out the way you came in because there is no public access to the park from the east.

For better or worse you see the same scenery twice. And you have plenty of time to appreciate it – it took us three hours of slow-go each way.

The landscape is pretty and varied, wild and untamed. It’s also rugged and spare. The best advice for enjoying it is to fill up your gas tank, dial back your internal pace setting to “slow” and make sure you’ve got all-terrain tires on your vehicle.

The best scenery is in the first 10 miles.

This is Cañon de Bandidos, jagged beauty in winter, alive with a waterfall with lovely pool in the summer monsoon season.

We hiked partway down to the spring at Ojita Adentro, betrayed by the bright green cottonwoods in the center of this photo. 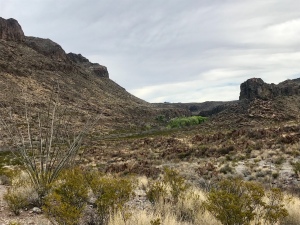 How long do you think it will take for this carefully balanced rock to finally tumble like the others around it? 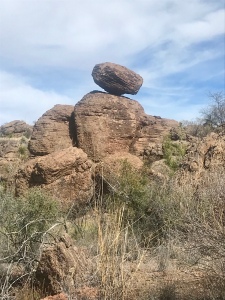 G was impressed by this example of sedimentary rock that has been “folded” to form an anticline. Note the arch-like shape on the left side of the rock formation.

We enjoyed chatting with park rangers Jim and Kirsten at the Sauceda Ranger Station shortly before noon and appreciated their candid assessment of the road on out to El Solitario.

If you’re a serious geologist you’ll appreciate the formation, but if you’re not you may be underwhelmed, Jim advised.

It’ll take you about 40 minutes each way.

Georges is a pretty serious amateur geologist and I’m always up for exploring backroads, so off we went. It was tough going and the geology all the way back at Tres Papalotes (“three kites”) in the heart of El Solitario wasn’t really any more impressive to either of us than the geology during the first half of our expedition. 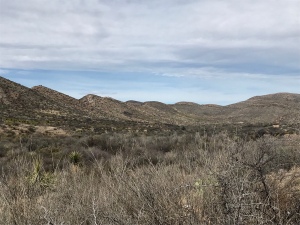 About all that was there was a corrugated tin shed and a non-functioning windmill, long since replaced by a solar water pump. If you look carefully to the left of the shed in this picture you can see a full-to-the-brim concrete circular water tank.

Early geologists thought this formation was caused by a large volcano or meteor impact. Aerial views and the inverted V-shaped mountains that surround El Solitario make it easy to understand how observers would jump to that conclusion.

But early geologists were wrong.

Here’s what the park brochure says about El Solitario: On first impression, El Solitario’s interior appears to be unremarkable terrain of low rolling hills covered by desert grasslands and scrub, but the exposed geologic history reveals one of the most remarkable accounts of our planet’s past up to 520-300 million years ago.

If you say so.

Bottom line: We’re not sure the trek was worth the effort. But we’re glad we did it anyway, if just to say we did. 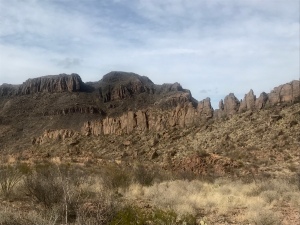 To be honest, we were more impressed by the four young men from Kerrville and Glen Rose we met back at the ranger station on our return route. Three were from Austin and one from Fredericksburg. They’d pedaled all the way into the park across the steep and rocky mountain trails from Lajitas and planned to camp overnight near the ranger station before pedaling on along the Epic Trail the next day. 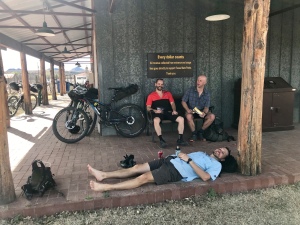 We loved the carpet of tiny yellow flowers on the way back.

We also saw a soaring prairie falcon, a couple of hawks, several CLBs (Cute Little Birds that we couldn’t identify) and this fellow checking us out. 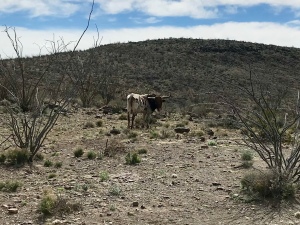 Never were we so happy to see pavement as we were late that afternoon. Then it was a short, magic-carpet-smooth 13 miles back down FM 170 to our hidden gem of a campsite.

Actually, there are 40-plus campsites scattered across this expansive state park. None have hookups and most of those in the park’s interior require a high-clearance vehicle to get to. With our trailer in tow the day before our state park jaunt, we preferred the small campgrounds on the south side of the park off FM 170 and fell in love with spot #4 in the Arenosa Campground maybe a third of the way from Presidio to Lajitas.

Here’s our picnic spot earlier in the day just off FM 170 a few miles west of the Arenosa Campground.

This is the entrance to Arenosa Campground. 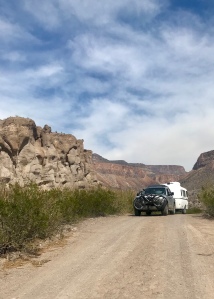 Here’s the view from our “bedroom window” of the Casita. (Yes, that’s the Rio Grande.)

And here’s the sunset our first night there. 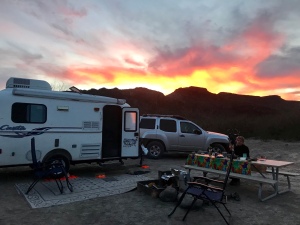 We could walk from our campsite to the Rio Grande, which winds through this area like a serpent slithering to the Gulf. It’s a long serpent. This waterway originates in south-central Colorado and flows into the Gulf of Mexico way down past Brownsville in South Texas. That’s nearly 1,900 miles – the precise length varies as the river shifts its course from time to time – which makes the Rio Grande the fourth longest river system in all of North America.

Can you find our Casita tucked into the remote landscape?

This area is just gob-smacking gorgeous. Why is it that a place like the Upper Peninsula of Michigan, which is equally remote, is packed in the summer while in a beautiful place like this, with 80-degree temperatures in February, we are the only campers for miles around?

It’s not like there aren’t other natural attractions in the area. This is one of the darkest-sky regions in the entire United States. That’s how McDonald Observatory in Fort Davis came to be.

The day before we entered Big Bend Ranch State Park, we took a three-hour “solar viewing” tour of the observatory on G’s birthday, which included a van trip with Guide Stephen up to the highest point you can drive to in Texas at 6,791 feet. There we inspected a 107-inch telescope, which Stephen said makes it bigger than the Hubble.

Interesting trivia: It takes two hours to swap out a 10,000-pound mirror for cleaning. The mirrors are coated with aluminum – a single soda can has enough aluminum to coat a mirror 10 times. The mirrors are cleaned by dry ice every two weeks; they are recoated every two years via an acid bath to 1/100th of the thickness of a human hair. This was largest telescope in world when it was built in the 1960s, now it’s 41st in world. 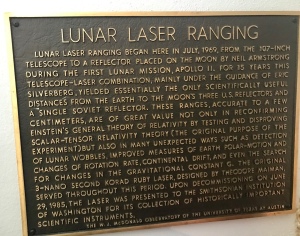 Then we went to see the 394-inch telescope. This one is the fourth largest in the world. It has 91 mirrors, totaling 22,000 pounds. (The biggest telescope in world right now is in Canary Islands, Spain.) This telescope was completed 1997.

Here’s Guide Stephen in front of the fourth-largest telescope in the world.

And here’s the Birthday Boy with the control box learning to swing the fourth-largest telescope in the world into position for best star viewing at night.

This is still one of the darkest-sky areas in the entire country, but light pollution from the surrounding area has nearly doubled in the last two years. The astronomers are working with the oil and gas industry on a set of voluntary light-limiting regulations. Stephen sounded optimistic that a meaningful accord would soon be struck.

Dinner that night was back in Marfa at LaVenture restaurant in the Hotel Saint George with good friends Mary Beth and Keith. They’d driven the nine hours down from Dallas to join us in Big Bend.

We had a grand time.

The prosciutto-wrapped quail that was a real hit, as well as the delicious beet-and-goat-cheese salad and roasted shishito peppers.

G said it was one of his best birthdays ever. Small wonder. Nothing is better than good friends, good times and good food!

8 thoughts on “When it comes to Big Bend, don’t forget the STATE park”