Election Day was notable for a number of reasons, among them the fact that we crossed on that day into Nevada, the 39th state/province since departing our home in Dallas in March.

Why Nevada, you might ask? It’s not on the perimeter; it hardly qualifies as part of your Year on the Edges of America.

Right-o. We deviated a short ways from the perimeter for a purely record-keeping reason. The photo that leads this post provides a hint as to why. 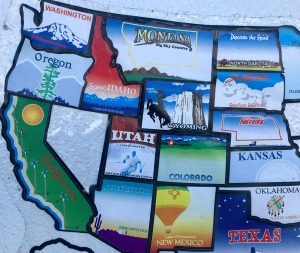 Do you see the single Western state not colored in? That would be Nevada.

The Casita, you see, has been all around Texas, from Big Bend to Palo Duro, Hueco Tanks State Park to the Sabine National Forest. It also has been to New Mexico, Colorado, Arizona and Utah several times since it joined our family 11 years ago.

We visited five other Western states in it during a 2013 summer vacation – Wyoming, South Dakota, Nebraska, Kansas and Oklahoma. And on this trip we added six more Western states (among others) – North Dakota, Montana, Idaho, Washington, Oregon and California.

We crossed into Nevada just after noon on Election Day, settling into an RV spot at Don Laughlin’s Riverside Resort Hotel and Casino on the banks of the Colorado River just in time for a leisurely afternoon walk before tuning into the election and watching the returns late into the night.

We’ll resume our perimeter route soon, probably heading south along the Colorado River toward the Mexican border before heading east again. We’re familiar with many of Nevada’s canyons and casinos from previous visits, sans Casita, so we won’t be venturing further into the state on this trip.

But now we get to add that Nevada sticker to our map.

For those interested in the sorts of nerdy details about our perimeter trip that so fascinate me:

Here’s what the map of stickies looks like on the door of our Casita right now. You can see Nevada colored in – no more Western island.

But what’s that island in the middle of the country? 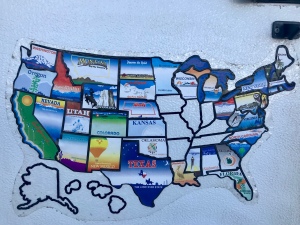 There are just seven continental U.S. states that the Casita’s not yet visited. They are Arkansas, Tennessee, Kentucky, Indiana, Illinois, Iowa and Missouri.

What’s up with that?

I smell a 2020 seven-state Casita tour in the making….

17 thoughts on “Why visit Nevada if it’s not on the perimeter?”