We’ve been remarkably healthy so far in this Year on the Edges of America. Mosquito bites, occasional allergy-caused itchy eyes and a mild case of shingles are all we’ve suffered.

Earlier this month, Georges came down with a mega-cold. He was healthy as a horse when I left for a quick in-and-out business trip to Dallas, which doubled as an opportunity to spend time with my Mom and our Beloved House-sitter (and see a dentist). But he was wheezing and sneezing with near-hurricane force by the time I returned to him and the Casita in Oakland three days later.

This is a man who never gets sick. He also never complains. And here he was knocked low by a sore throat, stuffy head, runny nose and achy muscles. (I was the one trapped for six hours on planes swimming in germs; go figure.)

Fortunately, we had plenty of over-the-counter medications. Remember that first-aid box we so meticulously packed in February?

It’s a good thing. Despite our best efforts not to share germs for a few days – tough to do in a 17-foot trailer – I came down with precisely the same cold four days later.

What a miserable pair. I felt like I was swallowing over a razor blade in my throat; G’s head felt as heavy as a bowling ball. We tore through tissues like hyenas in heat, our coughs reverberated as deep and cavernous as the Grand Canyon.

I’m sure we single-handedly kept in business the companies that make Kleenex, Zyrtec, Mucinex, Ricola cough drops and Vick’s Vaporrub.

There’s not much you can do on the road to get well quicker. One day, we ditched plans to visit the National Steinbeck Center in Salinas in favor of a two-hour nap in the Casita at a viewpoint pullover just south of Año Nuevo State Park.

I’m sure the park is lovely. I didn’t see much of it. G slept for an hour and then walked along the beach and spotted some gray-and-white harbor seals. I slept the two hours solid.

Our biggest concern became not infecting the friends we’d planned to visit. I called ahead and offered to divert for a day or two.

Don’t bother, our host said. Please press ahead. Neither of us is particularly germaphobic.

Press ahead we did. We parked in their driveway and enjoyed a delicious dinner together at their kitchen table. Then I retreated to the Casita and promptly went back to bed.

And slept until noon the next day. (Meanwhile, G and our hosts had gone for a short hike along the Carmel River.) Finally, after a shower and more medication, I began to feel like I was back among the living.

Our hosts were warm and gracious, our visit with them particularly sentimental.

Attentive readers of this blog will remember a lengthy post from May about our visit to the cabin my parents built in the 1950s nestled into the Shenandoah National Park in Virginia. The owner of the cabin, to whom my Dad sold it a half-century ago (over my schoolgirl objections), kindly allowed us to visit the cabin of my memories. His grandson, Peter, who happened to be visiting his grandparents at the time, en route to a Peace Corps posting in South America, even played the violin for us – a snippet of which I included in this blog post.

It was Peter’s father, Ed, who I used to play in the kiddie pool with at the cabin. It was Peter’s father who emailed me earlier this month with an invitation to visit him and his wife in their home in Carmel Valley not far from the California coast as we puttered down the western perimeter of the U.S. in October.

It was a thoughtful invitation. Neither Ed nor I have many memories of each other but we both have fond memories of The Cabin my parents built.

I have only three photos of Ed from that time. (Actually, they are my Mom’s photos.) He’s the one in each of them holding the boat; I’m the one out of the water. The other child in each photo is Anne, Ed’s sister, who lives in Atlanta with her husband and children.

We thoroughly enjoyed our time with Ed and his wife, Pam. They have a delightfully peaceful home on the hills of Carmel Valley, just a dozen-plus miles inland from the ocean. They’ve both led fascinating lives. Ed is an electrical engineer who loves his work unraveling the ocean’s mysteries; Pam traveled around the world, alone – twice! – in the 1970s.

We enjoyed the view, the camaraderie and – of course – good food. Ed makes a mean salmon dinner, wonderful fruit smoothies for breakfast and fabulous home-made hummus. One evening, G made his signature coq au vin. We sipped champagne. Everything was delicious.

I’m not sure we gave the Monterey-Carmel area its due on this trip, feeling as poorly as we did for much of it. But no matter. We’ve both been to the area before, and we can always return.

Best of all was catching up with Ed, a childhood playmate whose ties to The Cabin give him and his family a special forever-place in my heart.

And we finally had reason to open that giant first aid kit we’ve been toting for some 20,000 miles around the country. 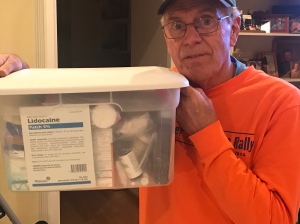