We’re loving our life on the road – the simplicity of it, the lack of a schedule, the freedom to follow our whims. 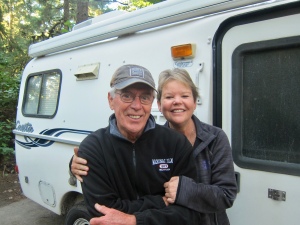 Still, there are certain mundane but important necessities of life that must be attended to, even in an otherwise-bohemian lifestyle.

Grocery shopping, laundry and car maintenance are pretty routine. But there are also dental, banking, internet, insurance, government – even hair care – challenges. This is the stuff you don’t read about in travelogues and adventure tales.

We’ve learned to set aside several days each month for Act-Like-Adult chores and to allow ample time for them so we don’t feel stressed if something goes awry or takes longer than we expected. It’s productive time, but not terribly romantic.

Another thing we’ve learned about these necessities of life is that we do certain things differently and sometimes it’s just better for one of us to get out of the way. Case in point: Grocery shopping.

All my life I have grocery shopped in a hurry. Grocery shopping for me is a gotta-do, not necessarily an unpleasant task but something to get through as quickly as possible in order to progress to other chores and responsibilities in a crowded life.

Success at the grocery for me is marching into the store list in hand, working my way systematically across the interior expanse without having to double back to repeat-cruise any of the aisles, selecting the most efficient cashier, presenting the cashier with an already prepped credit card, scooping up the bags of paid-for goods, galloping back out to the car, loading the bags in the trunk, launching to the next destination – in record time.

If there were a 100-yard grocery-dash event in the Olympics, I’d be a Gold Medal contender.

Georges, otherwise very athletic, takes a different approach to grocery shopping. For him it’s a leisure activity – a regular gastronomic Disneyland. It’s an opportunity to fondle the fruit, squeeze the bread, vamp with the vegetables, preview new products, compare prices, inspect the meat, smell the fish, choose the cheese.

Instead of sugar plums, G has visions of savory sauces, dish ensembles, wine pairings and other culinary creations dancing in his head as he saunters his way across a supermarket … at the speed of a snail.

Grocery shopping for G is like shoe shopping for me. We both do them judiciously but in greater excess than the other believes is necessary.

It took us (me) most of March and April to figure out that I shouldn’t do the grocery shopping. My emphasis on efficiency has little value in world without deadlines, schedules or appointments. It also risks turning what could be an afternoon delight for G into an afternoon of angst for both of us.

So we’ve struck a deal: He drops me at the laundromat and goes to the grocery by himself.

I enjoy laundromats. I like the smell of clean clothes and dryer pads.

I’m also intrigued by the cross section of America you see in them – the young, the old, the poor, the better-off, the hard, the soft, the fat, the skinny. Sometimes I strike up a conversation with the mother juggling bundles of dirty clothes and kids with ice cream down the fronts of their shirts or with the bachelor dude whose hamper haul rivals the Tower of Babel in size and scope.

Other times I simply lose myself in my iPad, catching up to email, scanning the news, drafting a blog post, reading a book. I never run out of things to do between starting the first machine and folding the final shirt. And that’s a good thing since G is usually .. ahem … still at the grocery.

Then there’s hair care – a piece of cake for G, a bit more complicated for me.

G is fine with just about any barbershop that’s reasonably clean, friendly and prompt. I, on the other hand, have been with the same stylist in Dallas for more than a decade. The idea of going cold turkey to a stranger brandishing shears and hazy highlights strikes fear into my heart.

But there’s little choice. It rather defeats the purpose of a year on the road if you fly home to the nest every time you have a hangnail or require a haircut. As it turns out, I managed to exit a Supercuts in Philadelphia, and another three months later in Seattle, without looking too much like a frazzled shorn sheep.

Next up: Searching for trustworthy salon in Arizona in time for the holidays.

One of our biggest necessity-of-life frustrations has been Medicare, a federal bureaucracy that keeps billing us for sums it insists are unpaid after having already cashed our checks for said sums. Rubbing salt into the wound is that the only form of communication it accepts is via the U.S. Postal Service. (Telephone wait lines are interminable and the resultant conversations unproductive; email is prohibited.) This makes doing business from the road exceedingly difficult, even with our Beloved Housesitter scanning us all Social Security-Medicare communiques as promptly as possible.

It took us a month recently to settle the insurance claim for our bikes, stolen off the front of our car in a lighted RV parking lot in the Pacific Northwest, due to annoyingly intermittent cell service that made it difficult to receive and return phone messages within tightly restricted Midwest business hours.

Managing our resources is critical, but not easy. It was May before we figured out how to manipulate the new IOS-compliant website unveiled in February by our investment company. We hadn’t learned yet to set aside enough still time away from the road to focus on such complexities, and on-again off-again cell service only intensified the frustration of learning a new platform format.

I’ve had a recurring dental issue since March. I had it checked out in May by a dentist friends in Charleston recommended and we ruled out the usual suspects – cracked tooth, abscess, damaged root. But the problem persists.

Of course, there are always the proverbial errands for friends that become necessities of life. One such request involved picking up a case of Caymus Zinfandel from Napa in October to deliver to a buddy in Tucson in November.

Frankly, we’d forgotten about the request amid a couple of weeks lallygagging along the rural coasts of Oregon and Northern California. I was halfway through the laundry in a suburb north of San Francisco (G had completed his grocery amusements the day before) when we remembered the request. Yikes! It was already nearly 3 p.m. and we were a good 90 minutes from the winery, which lists a closing time of 5 p.m. on its website.

We can do this!

G called ahead to put on hold a case of this particular wine – available only by pick up, not accessible online or for delivery – while I hastened to toss the freshly dried/carelessly folded laundry on the Casita bed. Off we went. We arrived at Caymus about 4:30, squealed into the first parking spot we saw, marched passed the tasting area and sashayed ourselves right into the purchase room.

The desired case of Zin was located, paid for, wheeled out and loaded into the car by 4:45 p.m.

Then we noticed the lovely grounds. 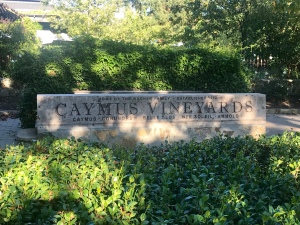 Would you like to do a tasting, the perfectly appointed young woman at the front desk asked.

Yes, that would be nice, we said. But don’t you close in a few minutes?

Our last commercial tasting has concluded but guests already here are welcome to stay. There’s no charge for the tasting when you buy a case.

So taste we did.

Wine educator Esiquio Plancarte was an excellent host. A veteran of the winemaking Wagner family operation, he displayed equal parts wit and smarts as we meandered our way through a 2017 Conundrum Rosé, a 2017 Mer Soleil Pinot Noir, a Red Schooner Argentina Malbec, a 2016 Caymus Cabernet and a 2014 Caymus special selection Cabernet. 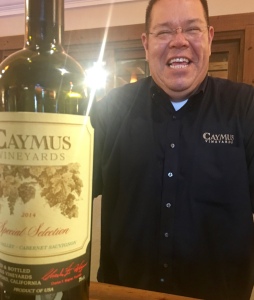 Esiquio, it turns out, is a master at sizing up people, as well as wine. We learned a bit about what it was like to grow up with the children of the Valley’s vintners, and he learned a bit about what it’s like to spend a Year on the Edges of America. (We even snagged a taste of the special Zin we’d purchased, which reinforced our conviction that the Zin is indeed the best of this vineyard’s production.) 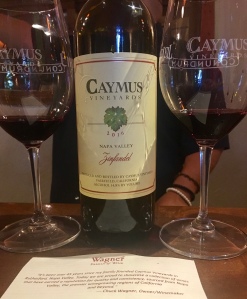 By the time we left Caymus, the sun had set and we’d lost any interest in returning to San Francisco to overnight.

So we drove to El Guadalajara, less than a mile away, reveled in their margaritas and a marvelous molcajete of shrimp, chicken, spicy cheese, chorizo, beef, scallions and cactus – and then spent the night in our Casita on the street just outside the restaurant.

Yes, the mundane necessities of life can sometimes get in the way of a good time.

Then again, sometimes they lead you to even better times.

20 thoughts on “You won’t read about this in travelogues”