The 3,600-square-mile Olympic Peninsula offers some of the most diverse landscapes/seascapes imaginable.

There are – of course – the mountains.

Here’s a view of Mount Olympus, partially shrouded in clouds, from Sunrise Point on Hurricane Ridge in Olympic National Park. 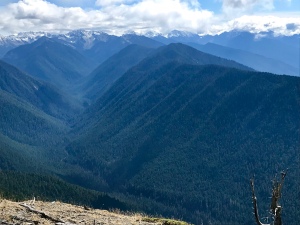 You get a better view of the snow-covered peaks about midway through Georges’ 17-second video of the area from the same point.

The Olympic mountains are Washington’s second-highest mountain range, after the Cascades. They are dramatic and beautiful. (Have you ever seen an ugly mountain range?)

These peaks are formidable. Small wonder that the Olympic Peninsula remained unexplored longer than most of the rest of the contiguous United States. The first documented scaling of the west peak of Mount Olympus – the highest of the mountain’s three peaks – wasn’t until 1907. (The east and middle peaks had been conquered nearly a decade earlier.)

An exhibit in the visitor’s center noted that a Seattle mountain club called the Mountaineers organized an expedition to climb all three peaks that year. The party that reached the summit of west peak included Anna Hubert, the first woman to scale Mount Olympus’ 7,980 feet.

This black-tailed deer took a brief break from grazing to personally welcome us to the overlook on the Cirque Rim Trail on Hurricane Ridge. 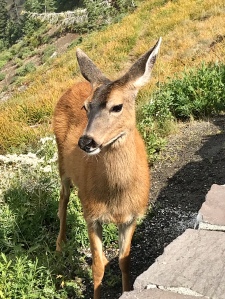 I was impressed to learn that there are no grizzlies or wolverines here. Black bears, yes – bald eagles, cougars, black-tail deer, dark-eyed juncos, yes. But no grizzlies.

We loved the rivers.

One drizzly afternoon, we walked through the dense forest to Sol Duc River in hopes of seeing the coho salmon swimming – leaping – upstream to spawn. These are some industrious fish. They travel 70 miles from the ocean and scale 17 feet in upstream elevation in order to lay and fertilize their eggs in the gravely river bottom of the Sol Duc.

Last weekend, they put on quite a show for us. Here’s just a glimpse.

We later learned at a fish hatchery visitor’s center that only 20 out of every 100 eggs laid by the female salmon survive to become fry. Once they emerge from the gravel, the fry must find a place in the stream that will provide food and shelter. Only 10 out of every 100 fry find adequate habitat.

With those odds, it’s a wonder that any salmon exist at all.

G caught me daydreaming (“rain-dreaming”?) the night we spent in Sol Duc campground after communing with the salmon. It had been raining off and on for days. We “lit” all of our battery-operated candles that night to give the Casita a warm, romantic feel. 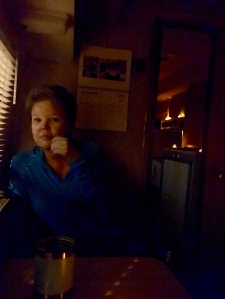 It’s a good thing we did. It got down to 35 degrees that night, 45 degrees in the Casita. Three blankets, long-johns and an open-face sleeping bag never felt so good. (Yes, we have heat, but where’s the fun in that? Plus, our solar panels were having a hard time finding much sun to soak up.)

One afternoon, we walked in the drizzle out to Sol Duc Falls. That’s G on the path next to a huge, picturesque, rotting red spruce tree. 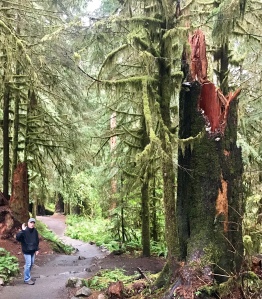 Here’s a shot of the trio of falls at the end of the trail. 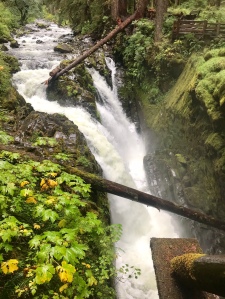 These falls aren’t nearly as high as those we’ve seen in British Columbia, the Upper Peninsula of Michigan or upstate New York. But we were so close to these falls that the thundering force of the water was almost deafening; it didn’t take long for the mist to leave us damp and sparkling in the wisps of sunlight through the trees.

That’s G in the upper left-hand corner of this next shot, hooded and shivering, looking down on the falls. 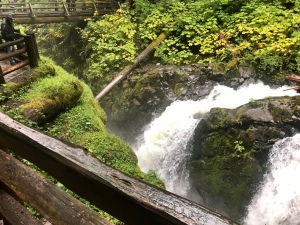 There are plenty of rain forests.

The three major ones in the Olympic National Park are Hoh, Queets and Quinault, all on the west side of the peninsula just inland from the Pacific Ocean. The Olympic mountains at the center of the Peninsula provide a “rain shadow” that creates these rain forests.

Last time we were on the Peninsula – 12 years ago with Texas-journalism friends – we hiked through portions of the Quinault rain forest. I remember it as lovely – exotic and eerie. The fact that we’d already been there, combined with the nearly non-stop rain during our visit this time, prompted us to pass by the rain forests this time around.

Here’s the marina in the village of Sekiu on the Strait of Juan de Fuca. That’s Canada’s Vancouver Island in the way-distance under the clouds. 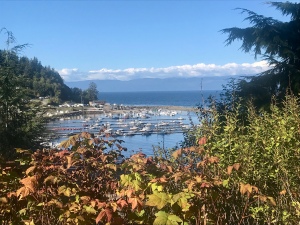 The drive west along Highway 112 from Sekiu toward Cape Flattery on the northwestern tip of the state is breathtaking, possibly the most underrated highway in the country. It hugs the coastline. We oohed and aahed our way around each bend and rise along the way.

We camped one night just off the round-pebbled beach about nine miles east of Neah Bay, where the Jansen Creek empties into the Strait. I watched a Brandt’s cormorant cruise for his aperitif in the distance. Soon, a buddy joined him with his own aperitif goals in mind. As I sipped my own calvados aperitif at the window, a third and a fourth Brandt’s cormorant swooped in to socialize with the first two. The four bobbed congenially on the waves….

Here’s a short video of our view the next morning.

We walked along the beach the next morning. Talk about picturesque driftwood! 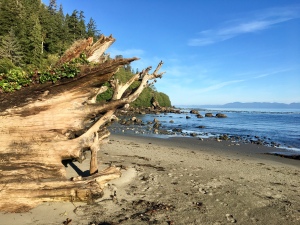 Later that day, we hiked out to Cape Flattery on the tip. This is where the Strait meets the Pacific. The sandstone beneath our feet is riddled with sea caves, and slowly eroding away…. It’s from these rocks that the Makah ancestors first sighted early European expeditions searching for the Northwest Passage. They called the Europeans “house on the water people.”

You can see the lighthouse on the island in the distance in the next photo, as well as the helicopter we watched make a half-dozen trips back and forth overhead from the mainland to remove what we later learned was contaminated earth for burial elsewhere. The lighthouse was built in 1857 and automated in 1976. 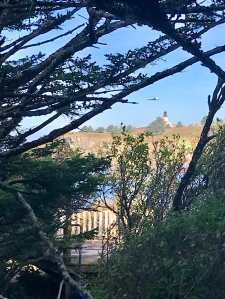 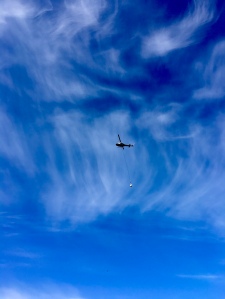 It was here that we saw a bald eagle glide on a current over the water before settling into a tree in the distance behind G – he didn’t seem the least bit bothered by the helicopter activity – and a bunch of seals sunning themselves on the rocks below the lighthouse. 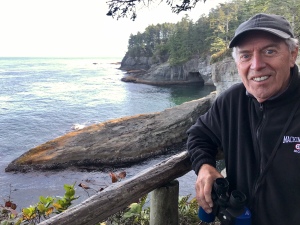 We enjoyed the Makah Museum in Neah Bay. There are archeological ruins in the area that date the Makah back some 4,000 years. They were whalers and seal hunters, expert at making 30-foot whaling canoes out of a single log.

We also learned about a ship bound for Tokyo that ran into a storm in 1832 and was nearly destroyed. It floated rudderless in the Pacific Ocean for 14 months. Just three members of the 15-member crew survived. The Makah took them in a cared for them until they could be returned to their homeland.

The next day, we loved our hike to Cape Alava, the westernmost point in the Lower 48, which you can read about here.

The geology is fascinating.

It’s very different than what we saw in the Canadian Rockies. On the Olympic Peninsula we saw a lot of igneous rock, having come from the earth’s interior, the product of lava and other melted substances.

In the Canadian Rockies, it’s much more sedimentary, earth that has been pushed up, twisted and broken from the forces within the earth, layer upon layer.

Here’s a view of the Pacific at Kalaloch Lodge, with the tide out, on the day we rejoined the mainland from the Peninsula, heading toward the Oregon coast. 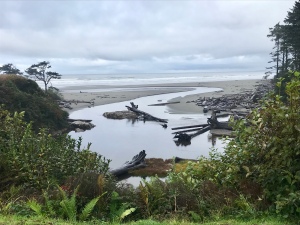 We’re going to miss this place.

8 thoughts on “The diversity of the Olympic Peninsula”