We thought by doing a yearlong perimeter trip around the United States we’d check many places off our bucket list. But actually we seem to be adding places to our must-return list.

We just spent a glorious, if tainted, four days on the eastern side of the million-acre park in northwestern Montana, the 12th largest in the national park system.

Glorious because the towering glacier-carved mountains demand reverence as you struggle to comprehend their enormity and history. We hiked to our hearts’ content across alpine meadows, through deep forests, around mirror-topped lakes, to rushing waterfalls. We enjoyed ranger-led campground talks. We met fascinating people. And we communed with wildlife – majestic antelope, curious deer, screeching magpies, lunch-snatching Columbian ground squirrels and … Black and Grizzly bears!

We topped the Continental Divide.

Tainted because a good portion of the park is closed due to raging forest fires. Even the areas that remain open are smothered in smoke.

Here’s the “view” from the Continental Divide at Logan Pass, looking from the east side of the park to the west side of the park. The entire western portion of the Road-to-the-Sun – a portion of which is in this photo – is closed due to fire danger. (The Highline Trail – barely visible in this pic running roughly parallel to and above the Road-to-the-Sun – is also closed, but for a different reason: Bears.)

The fires are all on the west side of the park at this point, yet the smoke coats the entire east side with a view-obscuring haze that dulls nature’s colors and casts an ominous gloom over the vistas. You feel it when you breathe, a thickness in your throat, a dryness in your nose. Some visitors wear surgical masks on the trails.

We were able to see but one active glacier – Salamander – and that was only after taking a boat across two lakes and then hiking a mile and a half. We couldn’t see the Jackson or Grinnell glaciers from any of the viewpoints because of the smothering smoke. All our photos are clouded and dulled.

Still, we loved our time here. And can’t wait to return. We must experience the west side of the park – before the last of the melting glaciers disappear!

We had several encounters with bears. The first two were comfortably in the distance, yet charmingly personal.

Here’s a mother grizzly and her two cubs enjoying a stroll along the banks of Lake Sherburne in the Many Glacier Valley. If I were a bear with babies, this is exactly the walk I’d take them on. (Makes me long for the days when I carried a camera bag with long lenses.)

Earlier that morning, we spotted this fellow closer to our Rising Sun campground in the St. Mary Valley. 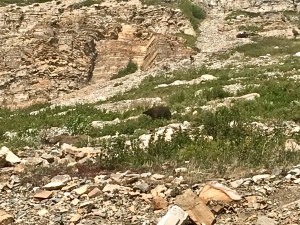 Later that day, when we returned to our campground after a full day’s outing, we learned that a bear had invaded a tent a few spots from ours, probably looking for food, and dragged a couple of pillows out to tear up before vanishing from sight. Nobody saw the incident, but it was enough to prompt the National Park Service to initiate its hazing protocol (loud sirens, flashing lights and gun shots designed to get the bear to associate unpleasantness with human proximity) and to close the entire 84-campsite campground to tent campers for the rest of the season.

Thank goodness for our hard-sided Casita. We didn’t have to move. 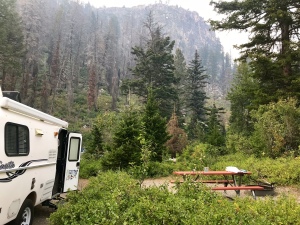 The next day, I thought our encounter with Carl the Columbian ground squirrel would top our list of wildlife encounters. He and his brother, Columbus, were quite insistent that we share our lunch with them at Logan Pass.

It’s easy to understand why. Here’s the lunch we packed that morning.

But we had just completed a steep three-mile hike to the Hidden Lake Overlook in 50-degree weather and winds, and were hungry ourselves. Plus, feeding the wildlife is strictly prohibited, an offense subject to significant fine.

Carl was rather insistent. 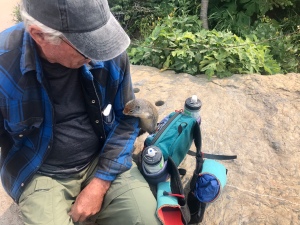 I swear he would have climbed right into G’s fanny pack if G had left the zipper open. 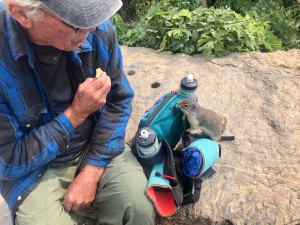 Here’s Carl the Columbian a few minutes earlier, posing for a Squirrel Centerfold just outside the visitors center.

But these encounters were topped later that afternoon at our campsite – now bereft of any tent campers – as this elegant doe wandered by. She clearly was looking for berries or some other aperitif and wasn’t in any hurry.

Moments later, shortly before dusk, I heard a rustling sound in the woods behind G as he was replacing his sunglasses in the car. It was a bear! A young one, maybe a yearling, not 50 yards behind G on the steep incline behind our campsite.

We rushed to get a picture, and then I walked over to the camp host to report the sighting, as requested by the park service.

By the time, the park host came to our site for a report, the young bear had meandered up the incline, beyond the dead tree marking the 150-yard barrier the park service has established as the required distance between bears and humans. No further action required, thank goodness.

Quite a punctuation point to an already exceptional day.

Our first full day in the park, we did a 5-6 mile hike that took us to three wonderful waterfalls. Baring Falls was first. 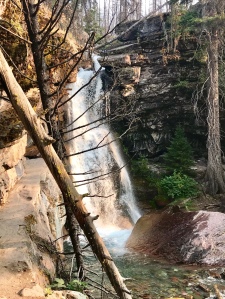 The hike to it was lovely, even though we were hiking through an area that had been burned by fire in 2015. 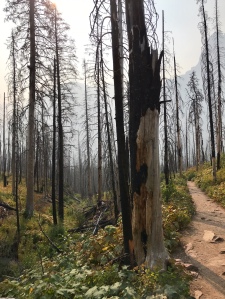 We watched a frog caught in one of the whirlpools at the bottom of these falls struggle to get a foothold back on land. We’re not sure he ever succeeded.

We passed a series of apparently unnamed cascades. G took this video.

My mind wandered as we hiked. The scenery in the distance reminded me of the movie A River Runs Through It. This is what I imagine Montana looking like, I thought…. Then I remembered: OMG! I’m IN Montana!

Finally, we came to Virginia Falls, the most dramatic of three dramatic falls.

These are some of the choke cherries along the trail.

G ate so many I began to worry there wouldn’t be enough left for the bears. 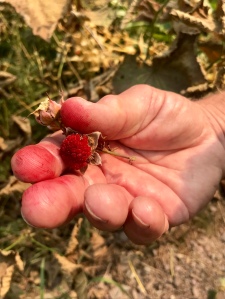 Another day we took this boat across Swiftcurrent Lake.

At the other end of the lake, we walked about a half mile to pick up a second boat to take us across Josephine Lake…. Then we hiked a mile or so to Grinnell Lake, which lies below the out-of-view Grinnell Glacier. 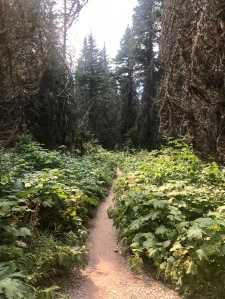 Here’s the view from another section of the trail. 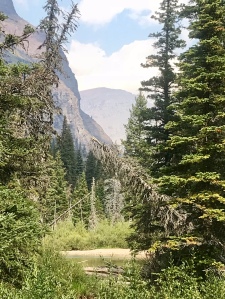 Here’s where we saw Salamander Glacier.

We can’t see Grinnell Glacier mainly because of the smoke. But even on clear days it’s but a spot in the distance. Climate change has shrunk it from 252 acres in 1966 to 139 acres in 2015.

Grinnell Lake was awesome. Here’s a short video of it – note the running waterfall way in the background.

Even with the smoke, you can see some of the color in this photo.

Most dramatic was our last day in Glacier. We took the shuttle up to Logan Pass and hiked up to Hidden Lake Overlook. I felt like Heidi in the Swiss Alps.

It’s less than two miles each way but it’s very steep. Here’s a view of the trail, an excellently maintained boardwalk that made the climb manageable.

G loved the geology along the way. This rock (framed by our boots) probably lay at one point on the bottom of an ancient sea. You can see the fossilized marine life in it.

Here’s a video of what we saw when we reached the summit.

I took the photo leading this post from this summit.

In order to qualify as a glacier a packed-ice snowfield must be at least 75 feet deep and 25 acres wide. An “active” glacier is moving. That happens when the bottom surface of the glacier melts, allowing it to “slide” down the landscape, picking up rock and residue along the way.

The Salamander glacier we saw is an active glacier.

In 1850 there were an estimated 150 glaciers in what became Glacier National Park barely 60 years later. By 1966, there were but 35. Today, according to the rangers we talked to, there are fewer than two dozen that meet the criteria, and those are melting fast.

Here’s an illustration of the glaciers and how they’ve shrunk.

And here’s a 16-second video of one of the cool exhibits at the St. Mary visitor’s center. If you look closely in the beginning, you’ll see little lights where all the glaciers were located in 1850. By 1900, you see many of those lights disappear. More disappear in 1950, then 1980 and finally 2000.

It’s estimated that by 2020 – less than two years from now – there won’t be any glaciers in the park at all.

The park is grand. There are six mountains over 10,000 feet. More than two million people visit every year. Last year, the park set an attendance record of 3.8 million visitors.

Why the spike? Ranger Elizabeth, who used to work at Yellowstone, has a theory. So many people have visited parks like Yellowstone, Yosemite and Grand Teton that those parks no longer seem exotic enough to merit bucket-list status. Glacier, she speculates, still has that rugged Fabio bucket-list appeal.

The park pays careful and appropriate homage to the three nations that cooperate in preserving its beauty. 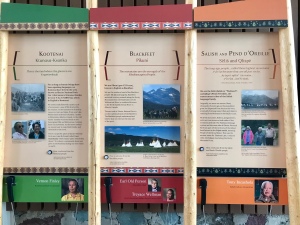 On our last day in the park it started to rain. We hoped it would be significant enough to drench the Howe-Ridge Fire into submission and help clear the air. 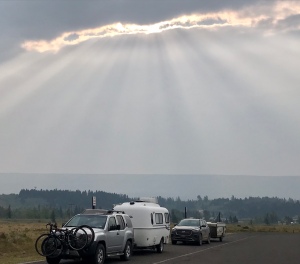 Is it any wonder we feel blessed?

8 thoughts on “With Glacier NP our bucket list keeps growing”