We’d just spent three glorious days on the Keweenaw Peninsula in northwestern Michigan and were working our way back down south into Wisconsin and then west into Minnesota. Looking for a good overnight spot en route, I spotted a tiny community on the map called “Crystal Falls” that sounded intriguing.

The “Michigan Pure” literature we’d picked up at the visitor’s center a couple of weeks ago raved about the Iron County hamlet’s annual Humongous Fungus Festival every August, aimed at mushroom lovers and celebrating “one of the largest – and oldest – living organisms on earth.”

We are big mushroom fans and it was a Saturday in mid-August. Might be an interesting affair, we thought. Maybe they have a farmers market of mushrooms or a music fest of some sort. Lessons on how to tell the precious from the poisonous would be cool. Games for the kids? A monster-mushroom race? Maybe a costume contest?

Imagine our disappointment that late afternoon as we pulled into the intersection of state routes 141 and 2 – which is pretty much all Crystal Falls is – to discover a sleepy town with nary a soul in sight, most businesses closed for the day and the high school and community center parking lots as vacant as Christmas tree lots in July.

We drove around town a couple of times – it took all of 10-15 minutes – and decided the tourism office had seriously overhyped might have been a fun festival once upon a time … but that’s faded faster than jeans in bleach.

A few miles south of lovely (?) Crystal Falls a “Recreational Area #23” sign off to the left of Highway 141 beckoned. We’ve no idea what a recreational area is, but we’ve a freshly purchased “Michigan recreational passport” glued to our front windshield and the dirt road looked intriguing. So to the left we go.

T-Mobile has messed with our “unlimited” internet-access across the northern tier of the United States so we we are without benefit of my beloved Google Maps. But no worries. We amble carefully down the gravel road – which requires us to shift into four-wheel-drive as it gets steadily narrower and bumpier – for a good hour before coming to a small boat ramp and turnaround at Paint River Pond.

The scenery is gorgeous, the small pier inviting, vault toilet immaculate – all part of the Brule Hydroelectic Project, according to the sign at the end of the road. We pull in, level off, explore the grounds. 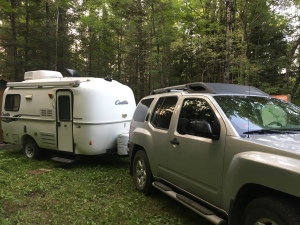 Soon, our stomachs begin to growl. Lunch, after all, was a good six hours ago at Haven Falls along the shore of Lac LaBelle not far from Copper Harbor.

Georges pulls shrimp and goat cheese from our Casita fridge and fashions an “oven” on one of the two burners on our stove. He commandeers a roasting pan, our small grill and a strip of tin foil, then places a cookie sheet on top….

He’d already cooked the linguini, barely, and set it aside. On the second burner, he conjured his signature beurre blanc – with a dash this time of top-tier extra virgin olive oil.

We dined shortly before sunset. It was scrumptious.

The shrimp were moist, bulbous, full of flavor; the linguini al dente; the Canadian parmesan cheese pungent; the sauce voluptuous. The fresh basil we’d bought at the farmers market in Munising provided the coup de grace.

Meanwhile, Paint River Pond glistened cobalt, the birch-and-maple forest crinkled green, the sky billowed blue. Two sazeracs and a toast to “making it up as you go along” concluded the evening.

Tomorrow will be the bustle of Green Bay … but for now we enjoy the tranquil solitude of a forest undisturbed.

8 thoughts on “So much for the Humongous Fungus Festival”