Yesterday, we made Belgian waffles.

More specifically, we made gaufres liegeoises (waffles Liege style), as opposed to gaufres de bruxelles (waffles Brussels style). This is not surprising. Georges and his friend Marc owned and operated restaurants for years as young men in and around Liege, a city of some 200,000 people in southeastern Belgium that’s as proud of its reputation as a New Orleans-style party town as it is for its history.

Liege, for example, was the birthplace of Charlemagne (aka “Charles the Great”), who united much of western and central Europe during the early Middle Ages. It’s a city worth finding on a map/visiting some day … for reasons beyond the fact that Georges was born and raised in this region.

It boasts a lot of history, even by European standards. The world’s first Neanderthal skull was found in what is now a Liege suburb in 1829 – nearly three decades before the skeletons of the Neander Valley in North Rhine-Westphalia….

We are visiting Marc and Francoise in their lovely home/ranch in Noyan, a tiny community in rural Quebec about an hour southeast of Montreal.

Then they lost touch – and led remarkable lives on opposite sides of the world. For G that included working in what was formerly known as the Belgian Congo; for Marc it included being among the scuba divers to recover priceless artifacts from the Empress of Ireland – “Canada’s Titanic” – which sunk in the glacial waves of the St. Lawrence River in 1914.

(Those stories are book chapters for another time.)

Forty years went by. Marc found G on Facebook about eight years ago. This is the third time we’ve gotten together since that happy connection.

Last time, Marc – a trained pastry chef – taught me to make tuile, that wonderfully light, baked French wafer, so crisp, so thin. Or tried to. I immediately went out and bought the special mat on which to roll the dough … and then never practiced enough to master the art….

This time we made gaufres liegeoises.

Full disclosure: Marc made the gaufres (pronounced ‘GO-freh’). The rest of us watched.

You have to have the right equipment….

…and the right ingredients. Marc special orders the 10-kilo bags of “pearl sugar” nuggets from Belgium. He’s never found it in Canada, where he’s lived for some four decades.

So what’s the difference between Brussels waffles and Liege waffles?

Both are considered “Belgian waffles” and contain mountains of butter. But their regional differences are profound and fiercely defended. (Think Tex-Mex versus Jalisco-style Mexican food or Chicago deep-dish pizza versus Dallas’ Cane Rosso Neapolitan-style pizza.)

You can like them both, but you have to have a preference. There are ardent proponents of each throughout Europe – and Quebec!

Our preference, of course, is for the waffles of Liege.

The key differences have to do with the sugar, yeast and batter/dough texture.

The pearl sugar nuggets, unique to the Liege style, caramelize into the waffle’s exterior as it bakes, which adds a specific sweetness and crunch to each bite.

Gaufres de bruxelles are yeast-free. In making our gaufres liegeoises, Marc mixes the yeast in decidedly warm (but not hot) milk and lets sit for about 10 minutes.

The batter for the Brussels version is thinner, more liquid, similar to what most Americans would associate with pancake batter.

The batter for the Liege version is a modification of the traditional brioche bread dough. It is thicker, denser, richer, chewier – and with the proper cajoling by the expert, surprisingly non-sticky….

Here is Marc folding and kneading the dough after he’s removed it from the industrial-sized mixer. 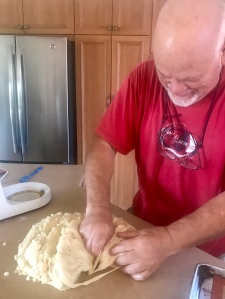 Then Marc takes precisely the same amount of dough (totally by feel) and rolls each “chunk” gently around and around in a small circle on the counter into two perfectly shaped, non-sticky, seamless mounds, which he then prods into round-edged rectangles for placement on the cookie sheets.

Here’s a quick video of his technique.

From there, we go downstairs where the ancient and magical waffle iron resides. I’d love to know how many waffles this iron has made in its nearly 40-year life. It must be tens of thousands.

Here’s a short video of that process.

And here’s G, the apprentice, practically caressing the ambrosian result. 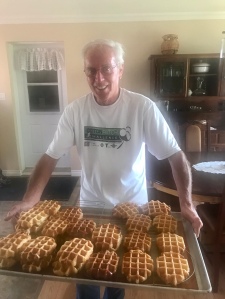 Of course, G and I had to sample the wares. We shared a steaming hot waffle and to say it was delicious is like saying it’s been warm in Dallas lately – a crime of understatement.

The waffle is firm, almost crunchy on the outside, then it melts in your mouth. It is deliciously sweet – and the best part is that bit of crunch courtesy of those caramelized pearls of sugar….

You can eat them plain as we did, or you can add toppings. Fresh strawberries would be my pick if required to recommend an addition.

What you can’t do (or risk being run out of Belgium or, er, Quebec) is drizzle them with syrup. That’s for pancakes. Belgian waffles – either Brussels or Liege – have too much pride and independence to be used as a mop for syrup.

The whole process took more than three hours, but we didn’t mind. The time flew by as we chatted – and tried our hand at swirling those mounds of batter into perfectly shaped loafs of dough of precise texture for the waffle iron. (It’s trickier than it looks.)

Here’s the recipe that Marc has used for the last half-century, in case you’re curious and can translate the French. Trust me when I say it’s all in the technique, though….

It was all G and I could do to resist snapping up another waffle or two to devour like starving animals feasting on red meat….

Francoise kindly bagged us some waffles for the road – plus another package just the right size for our tiny freezer….

Which means we can look forward to gaufres liegeoises dessert sometime in Michigan or Montana – if we can resist devouring them before then.

8 thoughts on “Learning to make ‘gaufres liegeoises’ from the master”