Sometimes you go far to see close. That’s what it felt like earlier this week when we snagged some quality time with daughter-in-law Crissy and grandkids Isabelle and Alex from Phoenix at the Camden Hills State Park in Maine. 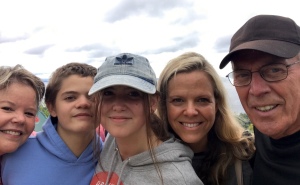 That’s 13-year-old Isa in the hat in the middle. Eleven-year-old Alex is next to her. They’re both 5’2” but it won’t be long before we’re all peering up at Alex, if recent growth trends continue.

It’s been months since we’ve been together, the last time was at the start of the year before the March 1 launch of our perimeter adventure. It turns out that Crissy and the kids were visiting friends and family in New England about the same time we were heading north to Acadia National Park.

We made a date to connect. And what a date it was.

Here’s Isa and me. (Photo courtesy of Crissy.)

And Alex and G.

We started with a hike up to Mount Battie.

Alex regaled us with his analysis of the appropriate thickness of ideal pizza crust. He very much enjoys the magazine Discover.

Isa has recently moved from vegan to ovo-lacto vegetarian; she’s very excited to be starting a new school this fall.

Crissy has launched an exciting start-up business; her work at a horse preserve is rewarding.

Isa and Alex’s favorite thing so far in New England? The region’s quintessential “general stores.” They seem to provide a greater variety of creative kid-intriguing products than typical markets or gift shops in Phoenix.

We also all marveled that lobster used to be considered food befitting only of the poor. It was abundant in the 18th and 19th centuries and so it was dirt cheap and routinely fed to prisoners and slaves. Some servants actually included stipulations in their contracts that they could only be served shellfish twice a week.

What’s up with that?

By now, we were at the top of Mount Battie. And the view of the town of Camden is pretty spectacular.

The boats in the harbor below looked like tiny white grains of salt scattered across a cobalt blue tabletop.

The view made me want to look up Edna St. Vincent Milloy’s poetry and re-read it all.

A weathered plaque at the summit (that didn’t photograph well) noted that a frail girl with flaming red hair, age 18, left her home early one morning to climb her favorite Camden Hills. So moved was she by her surroundings that she wrote a poem called Renascence – which won immediate public acclaim and launched the career of Edna St. Vincent Millay (1892-1950) as America’s finest lyric poet.

All I could see from where I stood

Was three long mountains and wood,

I turned and look another way.

And saw three islands in a bay

So with my eyes I traced the line

Of the horizon thin and fine.

Straight around all I was come

Back to where I’d started from.

And all I saw from where I stood

Was three long mountains and a wood.

Soon, we hiked back down the trail and settled into a picnic spot nearby. The kids and I rode together in the trailer – giggling, bumping and rocking along the way.

It was a lunch spot with a view. If you look closely you can see a sailboat on the right side….

Lunch was delicious sautéed-eggplant sandwiches on homemade olive bread – toasted on the stove in our Casita. A tasty cheese plate and a fresh-picked salad rounded out the meal. Dessert was hand-baked almond croissants and apple pie.

“This is the best lunch I’ve ever had in my whole life,” pronounced Isa, warming Poppy Georges’ heart like nobody else can.

Later, we played four-way frisbee and then, pleasantly spent, we sat in the park’s Adirondack chairs, enjoying the view, chatting about everything and nothing.

Alex says he loves to travel. Isa likes to work out. 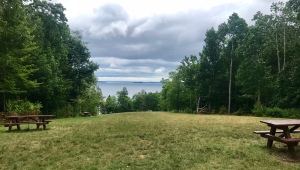 Soon it was time to leave – we heading north, they returning south. It was a wonderful six hours together.

It had threatened to rain all day, but the clouds held their tears.

1 thought on “Meeting up in Maine with grandkids from Arizona”