I’ve read novels set in the Hamptons, imagined social extravaganzas in the Hamptons, even enjoyed wine from the Hamptons. But neither Georges nor I had ever been to the Hamptons, which is why we decided on this trip to skip our usual Manhattan haunts and experience a bit of Long Island instead. 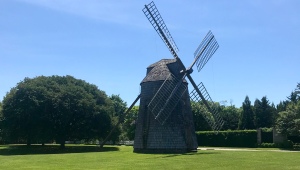 We didn’t visit any of the French Normandy-style estates thought to have inspired F. Scott Fitzgerald’s The Great Gatsby, though that would have been fun, too. We had but 36 hours to enjoy the East End before rendezvousing with my mother flying into Providence from Dallas, so we focused our attentions on more organic pleasures.

We started by taking the ferry from New London, Connecticut to Orient Point, New York. We left our Casita at my cousin’s home on the mainland coast for the night and took just our auto on the auto ferry. It was a glorious day – bright, sunny, cool, crisp. The 11 miles and 90 minutes flew by.

The John H. Auto Transport was the largest ferry of the five we’ve been on so far (in Texas, Louisiana, Alabama, Delaware, Connecticut). It even had a small exhibit on the first level with pictures and informative charts about sharks, whales, seals, crabs, osprey and other sea life. As you can see, we were in the company of some mega-trucks.

This part of Long Island is surprisingly agricultural. We drove past acres and acres of rolling fields, each carefully striped with green rows of vegetables or fruit. It was the height of strawberry season; we lost count of the number of eight-foot plastic red strawberries lining the roadway linking North Fork to the South Fork.

We sat on the patio, shaded by an enormous red-and-white canvas. I ordered the lobster roll, of course. It was everything I’d hoped for – bulbous medallions of fresh lobster meat drenched in clarified butter with a crisp bun and cool coleslaw.

Robert Parker crooned “Barefootin’” through the speakers, providing just the right 60s vibe. We got a chuckle out of this sign on the wall.

G enjoyed his fish and chips. It featured a golden brown, lightly crusted puffer fish that melted delightfully in the mouth. The world-traveled, award-winning chef knocked my socks off when he pronounced about his lunch:

“Best fish and chips I ever had.”

From there we hopped on our bikes and pedaled to the end of the island. It’s only 11 miles, but who knew that this narrow spit was so hilly – or that the wind would pick up so dramatically later in the afternoon. Our effort was rewarded by glimpses of the Atlantic through the trees along the way; we definitely burned off our lunch!

The Montauk Lighthouse on the eastern-most tip of New York is the fourth oldest active lighthouse in the United States. It towers imperiously over its pedestal of land.

First, we toured the lighthouse’s museum, which is very well presented – more professionally designed than most of the other lighthouse museums we’ve enjoyed so far.

It included a number of wonderful historic documents, including this one. 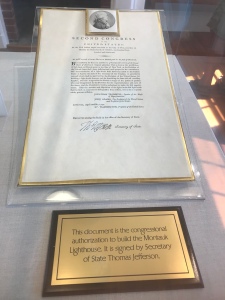 And I appreciated the care taken to extol the role Giorgina Reid played in stabilizing the bluff on which the lighthouse is perched.

We climbed the 134 steps to the top. Gusts of wind made it scary to pull out your iPhone to snag a photo for fear of dropping the phone or, worse, losing your footing altogether. I hung onto G’s belt-loops as he sought to capture the view in a short video.

We stopped about halfway back to the car at the original Montauk Brewery in the town of – you guessed it – Montauk. We’ve grown to love this craft beer. On this day, I found the Watermelon Session IPA especially delicious; G preferred the Summer Ale.

One of the brewery’s patrons sported a particularly cool look. (Actually, her parents were the patrons.)

Thirst quenched, we finished our ride and returned to our trusty Xterra.

The entire South Fork of the island was gearing up for the start of the 118th U.S. Open golf tournament, at Shinnecock Hills Country Club in Southampton. This had made finding a hotel room for less than $1,000 a night challenging.

That, we rather expected. We had managed to snag a more affordable reservation about an hour’s drive from the Lobster Roll lunch spot.

But what we didn’t anticipate was the traffic mess. The tourney wouldn’t start for another two days, but Highway 27 is the only road that runs across the South Fork of the island and it was already jammed. It took an hour just to get through the tiny town of Bridgehampton – and we still had another six miles before even approaching Southampton, home of the hosting country club.

By the time we reached our motel in Port Jefferson Station it was late and we were hungry. Chinese seemed a good idea; we’d not had any since before we set out on our yearlong perimeter adventure months ago. Yummy Kitchen and a dose of hot-and-sour soup and some spicy shrimp fit the bill.

It was misting the next morning. Our plan had been to walk along Coopers Beach and gawk at the mega-mansions, stop at the Wolffer Estate winery to sample their famed rosé wines and then sip something at the Baron’s Cove – a regular haunt for the likes of John Steinbeck, Kurt Vonnegut and Truman Capote – before catching the ferry back to the mainland. But these locales were all back in the Southampton-Sag Harbor area. The prospect of spending another hour – or more! – in traffic soured us entirely on this itinerary.

It wasn’t the first time. I’d already dismissed, with regret, the idea of trekking to Fire Island as it was just too far west to incorporate into our travel plan without reshuffling it all together.

Megan Marshall’s biography of Fuller, titled Margaret Fuller: A New American Life, won the Pulitzer Prize in 2013. It was one of my favorite books during the nine years I served on the Prize board, in part because I knew so very little about Fuller prior to this book and, through it, came to appreciate the dexterity with which she managed her life as a woman and a literary scholar in the early 19th century.

(Her peers included Henry David Thoreau, Ralph Waldo Emerson and Nathanial Hawthorne. I’m still grinding my teeth over the fact that we know so much about the literary lions of the era, and so little of the leading women.)

Fuller led a quietly bold and expansive life, which makes the fact that she died a needless death all the more tragic. Fuller was on the 530-ton Elizabeth sailing from Italy to New York on an ill-fated summer night in 1850.

The captain of the Elizabeth had taken ill, leaving the ship in the hands of an unseasoned first mate. The ship struck a sandbar just off Fire Island in the predawn hours. It sunk. As Marshall describes it, most of the passengers abandoned ship and swam for shore. Not Fuller. She, her husband and her small son drowned.

There used to be a bronze plaque on the beach of Fire Island commemorating the wreck and Fuller’s death. But a few years ago that, too, washed out to sea. As far as I know, there’s nothing left to mark Fuller’s fate. That makes me sad.

I’d hoped to visit Fire Island to pay my respects. But this trip it wasn’t to be.

So, on this rainy spring day, we needed to recalibrate our recalibration. We set off on a leisurely drive along the northern coast of the island, weaving our way back in the direction of the ferry. This is a much more middle-class area, with homes that look like they’ve been in families for generations – incurring property taxes that make them increasingly difficult to maintain.

We stumbled onto Lewin Farms, a canopied open-air market with sawdust on the floor and an acre of brightly colored fresh produce in bins and displays. We stocked up on vegetables for five for the week, snagging probably $50 worth of produce for $18 – feeling both virtuous and victorious.

Palmer Vineyards nearby turned out to be a fabulous discovery. In operation since 1983, it’s the fourth-oldest vineyard among the 53 vineyards on the island. 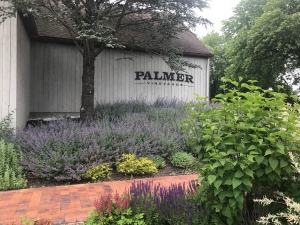 We liked the small museum inside with the large, spotless windows through which we watched a worker set several new barrels for aging.

We also liked the view out back. Here’s one. 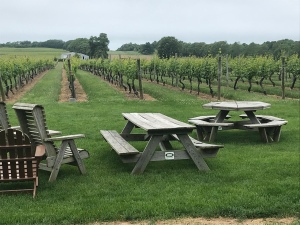 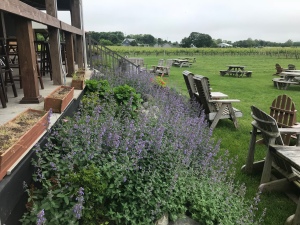 The owner of the winery is a woman; the winemaker from Spain.

There was a quiz posted on the wall. G got five of the seven answers right – six if you concur with him that the answer to the last question is subject to interpretation.

I got only two answers right.

You can take the quiz yourself.

Here are the questions.

Settle on your answers before you scroll any further. To make sure you don’t sneak peak, I’m posting a decoy picture here. 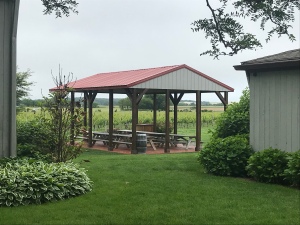 OK, if you’ve settled on your answers, here’s a photo of what the winery says they should be. 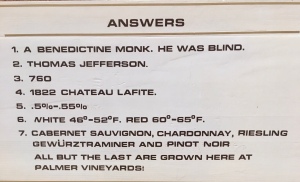 Regardless of your score, it’s easy to enjoy the vineyard, known for its Pinot Blanc and Cabernet Franc. I was particularly taken by this sign (which hints at something that’s apparently a bit of a problem in the Hamptons), the sommelier and the Spanish albariño.

Christian, it turns out, teaches high school nearby, has worked at the winery as a side job for several years and is seeking a doctorate in history. The albariño, crisp and dry, is similar to an Italian pinot grigio with hints of peach and apple. 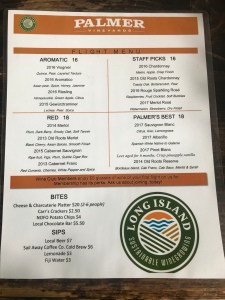 By the end of our tasting, Christian was pronouncing the French words for “white” and “frank” properly, per a tip from G. (Never pronounce the “c” at the end of words like “blanc” and “franc.”) And we had another three bottles of wine that we didn’t need, but very much wanted.

Loved this this sentiment on the winery wall as we returned to our car. 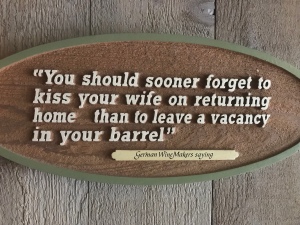 Lunch was at the Southold Fish Market, where I had another lobster roll, this one featuring more of a lobster-salad presentation. G enjoyed the Mahi-Mahi tacos.

Both were extremely fresh and exceptionally tasty. Too bad we weren’t staying longer or hosting friends for dinner – the fresh seafood to take home to cook looked fabulous. Here’s just one example.

The Hamptons boast the classiest McDonalds I’ve ever seen. 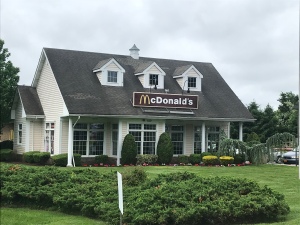 We stopped at Lavender on the Bay and then caught a late-afternoon ferry back to New London. In just a few hours, Mom would arrive for the start of a wonderful reunion with friends and family….

6 thoughts on “Manhattan or Montauk?”