Here are some of the unexpected annoyances and pleasures of living together in tight quarters that we’ve discovered as we launch the second month of this 12-month odyssey:

1. We utilize Google maps differently. I like “north” to always be at the top of the map on my iPhone; Georges prefers to orient the map so that the car is always driving “up” – toward the top of the screen, regardless of which direction we’re going. 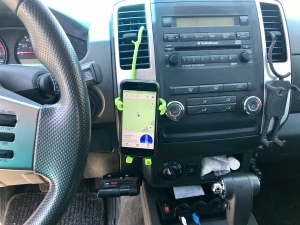 Yes, I understand that it’s easier to know instantly whether a right or left turn is coming up using the map his way. But I want to always know where we’re headed in context, e.g. are we headed north or south, east or west. That’s why I prefer the north-always-top orientation. I can convert in my head whether it’s left or right turn if we’re headed south, for example, toward the bottom of my Google-map presentation.

This “mixed marriage” issue caused a problem outside of Mobile, Alabama a couple of weeks ago. We needed to find a Love’s Truck Stop to dump our black and gray water and I glanced at G’s iPhone, forgetting for the moment his weird preferred orientation, and assured him that the Love’s we were headed to was indeed south of the Walmart we were at and, thus, not out of our way as we headed to the Dauphin Island ferry. After all, Love’s was near the bottom of the screen of his iPhone and our current location was near the top.

A few miles into the pursuit of that truck stop, however, we realized we were headed north to Love’s instead of south. Damn. I wish he’d use Google maps the right (”my”) way.

Not going to happen. He thinks I’m nuts; I think he’s stubborn. We’ll have to learn to live with this difference.

2. We have different tolerance levels for car rattles. G will stop six times on the highway if that’s what it takes to find the source of a particular squeak, rattle or jiggle. I say if we can’t fix it after a stop or two, live with it.

Actually, on this one, I’ll concede. No noise gets past G. He can always – ultimately – find the source of the rattle. He then uses his much-heralded Macgyver skills to silence it. An adjustment here, a cushioning rag there. He’s been known to devise special hooks on the car ceiling to better secure items in the cargo space and to carve animal-shapes from memory foam to use as a wedge between a rattling toolbox handle and its box – or between the two lounge chairs pictured here.

It may take us an extra hour to get to our destination as he stops every five minutes until he discovers the offending squeak and finds a way to quiet it. But once he succeeds, the silence is indeed golden. And who’s on a schedule, anyway? We have 12 months to make it around the country.

3. We prioritize differently. Georges, being a chef by profession, does most of the cooking. (OK, he does all of the cooking.) It seems only fair that I should do the dishes. I’d like to do them my way, thank you very much.

Different ways to do the dishes? You have no idea. I prefer to finish dinner completely, savor an after-dinner drink, maybe go for a short walk after dusk – and then do the dishes.

G thinks they should be done immediately. And if I don’t start them immediately, he does them himself. Which makes me feel like a chump just sitting there sipping my after-dinner drink.

We may have reached a compromise on this one. I’ve agreed to put the dishes in the plastic washing tub to soak immediately after dinner, and then finish washing them after our walk. But every now and then, the pain and suffering that goes with delayed dish-washing becomes intolerable for G and he breaks down and gathers up the dishes to wash them quickly behind my back.

We’re still working on this one.

1. We’re both kind of neat freaks. This is a good thing when you’re practically living outdoors and need to keep your 17-feet of bed-bathroom-kitchen space clean and orderly. One of us is always shaking the rugs, sweeping the floor, emptying the bathroom trash.

G generally keeps the cargo in the car and Casita carefully organized so we can find what we need without embarking on an eight-hour search-and-recovery mission anytime we need something.

I keep the inside of the trailer neat, carefully making the bed each day – it takes up a good third of the trailer space, after all. I do this mainly because it looks better that way and I get pleasure from the quilt my girlfriend made for our travels, the personalized “happy camper” pillow another girlfriend special ordered for us and the photo pillow I designed featuring my 90-year-old mother with us on a California beach.

Truth be told, I also do this because we meet so many people who are intrigued by our small and agile comfort trailer and ask to take a peak inside. I can’t bear the thought of “company” seeing our sheets astray, our pillows mashed, our blankets awry.

2. The ease with which we’ve both adapted to days here and there with no internet service.

At first, this felt unnerving. I’m accustomed to reading several online newspapers each day and staying in touch with friends and family via email, phone and various social media platforms. I like to check the weather reports for areas we’re about to visit. And I’m an incessant user of Google maps as I chart our course each day and scout for parks, museums, hiking and biking trails, grocery stores, etc.

G taps into various websites regularly, especially those related to business and investments. He’s active on email and only recently ditched his Facebook account because he found himself spending too much time on it.

So it felt weird to be briefly without internet service as we passed through certain rural areas of Texas and Louisiana. But by the time we had to go for nearly three days without internet access from a special state park in Florida, it was almost old hat.

And you know what? The world kept spinning. When we re-engaged in Crawfordville, about 20 miles south of Tallahassee, we learned that Trump is still president, tensions with North Korea continue to escalate and members of Congress are still more interested in fighting with one another than solving problems. Really, we didn’t miss a thing.

3. The miracles of G’s toolbox. It has helped us solve problems and make friends on the road. It’s a heavy box and it takes up valuable space in the car, but neither of us would have it any other way.

So far, G has used it to: fix the door on the 13-foot Scamp trailer owned by new-friends-from-Austin Joel and Mary at Kickapoo Cavern State Park, adjust the hinge on cousin Carol’s refrigerator door in Weslaco, better secure our bike rack in Goliad, finesse at Palmetto Island State Park in Louisiana the equivalent of a doorstop for our hitch to keep it from jolting so much, recenter the holder of Colin’s garage door in Vacherie, replace the Casita battery in a Walmart parking lot in Mobile, Alabama – and that was just the first three weeks on the road!

G can be a bit of a fuss-budget about his tools, but it’s fuss-budgetry that gives us a tremendous sense of security on the road. That’s definitely a form of pleasure.

4. The case of the mystery wine flask. Yes, we’ve been known to drink a bottle of wine now and again, and this thermal-insulated wine flask is a great way to keep our wine the right temperature without taking up valuable space in our dorm-room-size refrigerator.

It also packs nicely in a back pack.

The only issue is this flask was a bon-voyage gift to us from a very special friend, somebody who appreciates our wine-drinking pleasure and was thoughtful enough to select a gift designed to enhance it. Clearly, somebody near and dear to our hearts. Somebody … uh, errr … somebody we can’t remember who. (Consequence of too much wine?)

Our memory burp is embarrassing. But systematically recounting to one another which of our friends might have given it to us has sparked much introspection about friends and friendships, shared experiences and aspirations. Such a pleasure.

If you’re reading this and you’re the wine-flask giver, please speak up so we may properly salute you!

5. Our mutual coalescing around a strategy for snagging great last-minute camping spots during busy vacation weeks – without reservations.

Most state and national parks are booked months in advance during holiday weeks like Memorial Day and Fourth of July. Since we enjoy spontaneity in our travels and rarely make any reservations, we figured we’d be hunkering down in Walmart Supercenter parking lots from time to time during these popular weeks.

During spring break and Easter, however, we landed four nights lodging at top-ranked state parks simply by being at the right place at the right time. Most parks require that you sign up with ReserveAmerica.com to book campsites in advance. But we’ve learned that many parks also have a handful of spots they don’t put on the website that they hold for first-come-first-serve last-minute campers.

So we’re no longer deterred when ReserveAmerica says the state park we’re interested in is all booked. We show up anyway. If we get there shortly after noon, we can sometimes snag one of the FCFS spots, or there might be a cancellation we can jump on.

The key is to be flexible, willing to quickly change plans to accommodate an opening or to risk a turndown. We always have a Plan B (quiet street somewhere pretty) and a Plan C (Walmart Supercenter parking lot in a town nearby, most encourage RV overnights not to exceed 24 hours).

So far this strategy has worked for us. The three nights we lucked into over Easter weekend in St. George Island State Park on the Emerald Coast of Florida, ranked one of the best state parks in the nation, were sheer heaven.

Some people booked their spots at this park a year ahead of time. Not us. We got in on a wing and a prayer – which made our experience there seem all the more “meant to be” special.

24 thoughts on “The challenges of living together in tight quarters”