Trumpets didn’t blare and the angels didn’t sing, but it still felt pretty momentous when we pulled away from our townhome with our Casita in tow on a recent Thursday morning to embark on our Year on the Edges of America. 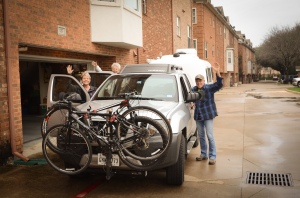 Three beloved friends were on hand for the final preparations that morning. They brought breakfast tacos, snapped photos and imbued us with the warmest of “bon voyage” wishes.

Georges darted nervously about, removing batteries from household appliances so they wouldn’t corrode while we’re gone, triple checking his toolbox to eliminate space-wasting duplicates, doling out the last of our leftover home-cooked gourmet meals from our freezer.

Me? I couldn’t wait to hit the road. Let’s get on with it.

Finally, at 9:24 a.m. – more than an hour earlier than originally planned – we pulled out onto the street in front of our downtown Dallas home. We – Georges, me and my 90-year-old mother (who will accompany us on the first 11 days of trip and visit us periodically on the road throughout the year) – waved good bye, beamed Cheshire Cat grins at one another and flung ourselves full force into our yearlong trip along the perimeter of the United States.

And then it hit me. Just for a moment. As Georges was negotiating the on-ramp for westbound I-30, I looked blindly out the windshield, suddenly overcome by tears. We’re gone, I thought. Finally. For a whole year!

What have we done?

Has what I’ve imagined a hundred different ways every night for the last year-and-a-half actually come to pass?

But then the reality of daily life sinks in.

Why is the tablecloth for the picnic table underneath everything else packed in the car? Where did we put the extra bungee cords to tie down the tarp on the bikes? How did all that dirt get in here? What if the engine overheats, the Casita blows a tire, the bike rack breaks?

About that bike rack: It’s been the source of marital discord for more than a year.

Attentive readers of this blog already know the finer points of this dispute. The bikes jiggle too much on the back of the trailer but Georges ruled out putting them on top of the car. We’d compromised a month ago by mounting them on the front of car, only to find they impaired visibility. So back on the tailgate they went.

But on the way home from a photo shoot at White Rock Lake just three days from departure, we took another look from a tail car. The bikes’ bounce as we passed over railroad tracks near our home rivaled that of Olympic springboard divers. Yikes! Back to the drawing board.

How to secure the bikes? There’s no way we can fit them inside the car and putting them inside the Casita is just too cumbersome. Is carrying them tens of thousands of miles without damaging them even possible? Do we need to ditch them altogether?

We spent sleepless nights turning this over in our heads again and again. And again.

Some people get cranky when they don’t get enough sleep.

Georges is no exception.

Finally, the day before lift off, Georges found a “third way.” He put the bikes back on the front of the Xterra, but removed the seats and resisted the instinct to cover them with a protective tarp. Sure, they’ll pick up some road grime this way, but they are way more stable on the front of the car than the back of the trailer. And with the seats removed and no cover, the visibility impairment is minimal.

This victory came with several benefits.

One was that it allowed G to repurpose used champagne corks. Yes, they make perfect stoppers for the bike-seat stems, preventing water or dirt from clogging them. (As if the primary use for champagne corks weren’t sufficient.)

Another is that G got a good night’s sleep for the first time in weeks.

We spent our first night 305 miles from Dallas, at the South Llano River State Park just beyond the town of Junction in the Hill Country of Texas. Dinner by sunset was a delicious ham, beans and sauerkraut dish.

We needed every blanket and the Casita’s heater that night, but waking up to birds singing and a lovely walk through the turkey roosting area (allowed only after 10 a.m. during mating season, which extends into March) made it all worth while….

The microphone we’d rigged up to enable Mom to hear us from her backseat perch seemed to be working well. The vermillion flycatchers, Northern cardinals and cedar waxwings were abundant. We even saw an elusive green kingfisher. And the short hike up the Overlook Trail produced a wonderful panoramic view of the Llano River Valley.

I feel like I’m living a dream. As teenagers decades ago, my cousin and I decided we would marry forest rangers and spend our lives perched in lookout towers reading books and watching for wildfires. (Never mind that burying one’s nose in a book and peering in the distance for fire would seem mutually exclusive exercises.) Neither of us married rangers, but this idea of simple living and spending a year exploring the edges of America is pretty darn close.

Later, Georges, Mom and I moved on to Kickapoo Cavern State Park, further south, for two nights. The drive was beautiful, the bats abundant, the cave tour invigorating. 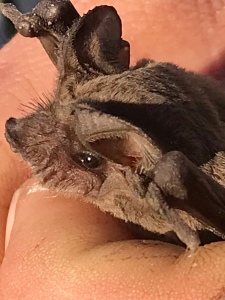 But there are three of us in this 17-foot trailer and we’re stepping on each other.

One of us tracks mud into the Casita, G and I discover additional variations in our standards of organization, and the special microphone system we’ve rigged starts crackling and emitting an ear-piercing whistle. G is worried about the start-up business he’s temporarily turned over to his brother in Belgium and whether we’ve made the right investment decisions to support our retirement.

Plus, I learn that the special tube that we’d planned to carry our fishing poles in actually holds an extra sewer line. So much for catching our own dinner from time to time.

We drive another 300 miles to Falcon State Park on the Rio Grande south of Laredo. (Not to be confused with Falcon Lake State Park, which doesn’t exist. None of the campsites are lakefront and I’m not even sure any of them have a lake view.) The temperature has climbed and so has the tension. We take spot #120 for its afternoon shade.

Lessons on the road

We’ve barely begun this trip, and it’s harder than I expected. We’re still in search of a rhythm for our travels.

2. I can’t control others’ stress levels, but I can control (if I try real hard) how I respond to them.

3. My 90-year-old mother is a trooper. She never complains. In fact, sometimes it’s hard to tell if she’s actually having a good time. I think she is.

On Monday, we discovered Salineno Preserve, hidden amid a thicket of mesquite and ebony trees just a few yards from the Rio Grande. What a delight. We tallied a dozen new life birds within the first hour, including the dramatic green jay, chachalaca and Altamira oriole. Then we enjoyed a picnic of pate and cornichons as a trio of great kiskadees looked on.

Later, G and I went for a long bike ride around the edge of a lake tributary. 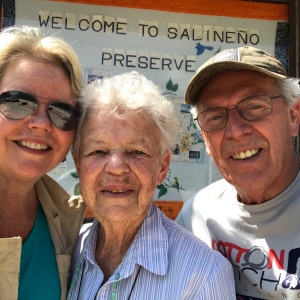 I had packed a special pen and paper and on Day Three of our year’s adventure, by pre-ordination, we each wrote down three experiences we hope to have 2018. We rolled our papers, tied them with ribbons and deposited them – the contents unrevealed to the other two – into a special canister selected for the occasion.

We zip-locked that canister in a plastic bag and buried it in an undisclosed location in the Kickapoo park, which marked the official start of our perimeter trip around the United States.

We’d picked Kickapoo deliberately – it’s far enough south to be within 100 miles of the border (our self-imposed guideline as to what constitutes “perimeter” territory) and will enable us to return home next year having completed a full loop around the country without having to plunge all the way to South Texas before heading to North Texas.

Here’s hoping we’ll find our rhythm soon – that the three of us will be together next March, heading home from Big Bend through Kickapoo, and that we’ll be able to find that same spot, unbury the canister and recover our written aspirations.

In the meantime, we’ve a lot of ground to cover.