UPDATE 2/27/19: Idaho Public Television has just aired a special about off-grid living; the second segment of this installment features Steve and Elizabeth and their solar-powered abode in the mountains of northern Idaho.

My cousin, Steve, has always been precocious. As a boy, he wanted to hear what his parents said about him when he wasn’t around. So the 9-year-old rigged a hidden microphone in their bedroom and ran a camouflaged wire into his room so he could eavesdrop on their conversation.

But he was his father’s son.

Uncle Frank, an electronics engineer who would go on to design submarine reconnaissance systems and satellite navigation equipment, quickly figured out what little Steven had done. He connected a light to the microphone so whenever Steve turned on the microphone from his room, the light flashed in his parents’ bedroom. Then Uncle Frank and Aunt Clarice engaged in fantastic tale-telling, specifically for their mischievous son’s benefit.

Call it counter-espionage. They essentially out-spied the young spy.

I’ve always loved this story about Steve, whom we visited for three days last week in Idaho. It speaks to his innate curiosity, ingenuity and determination.

But it doesn’t quite get at his principled independence.

Aunt Clarice used to tell me another story about her son, who became a vegetarian at age 12. She and Uncle Frank hosted dinner parties in the 1950s when Steve was young. At the end of the evening, when the women would retrieve their fur coats from the hall closet, each would find a small paper in the pocket of the coat.

On it was written how many animals had to be killed to make their coat.

(For the record, Steve confirms the first story, but gently disputes the second: “That might have been a friend who did that; it was a good one.”)

Steve, now 74, has always lived his principles. He and his wife, Elizabeth, 71, are dedicated to peace and conservation. They are Quakers, active in the local no-kill animal shelter, and have lived off the grid in a windmill on a mountain top near Sandpoint, Idaho for 45 years.

They are among the most interesting people we know.

The windmill-home has long since been converted to solar power as there’s more sun than wind where they live, and the technology around solar is better. The view from the windmill is fabulous. Here’s a short video to give you the idea. (Note our Casita parked far below in the distance about halfway through.)

Steve and Elizabeth met and married in California as newly degreed college students in 1968. He majored in philosophy; she in sociology. As 20-somethings, they converted a 33-foot bus into comfortable living quarters, painted it “Plum Crazy” purple and moved to a 20-acre mountain crest 15 miles northwest of Sandpoint in 1973.

“It was the only land we could afford at the time,” Steve recalls.

They lived in that bus, high on the mountaintop surrounded by a dense and diverse forest, for two years while they built their home. Elizabeth recalls the bitter cold of winter: If you spilled water on the floor of the bus at night, you could watch it freeze; they slept under 12 blankets and comforters.

The “comfort station” they built then still stands – complete with a curtained picture window and indoor decoration – tucked into the forest about a hundred yards from their current home.

Their dream was to build a home so energy efficient, powered by wind and solar, that they could live totally off the grid. They started by building a narrow tower, roughly the equivalent of five stories high.

◦ A small foundation is energy efficient; heat rises so it takes less energy to heat a vertical structure than a horizontal one.

◦ Their radio antennas would get stronger signals from such height. (They had no water, electricity, sewer or phone service to the property.)

◦ The view would be fabulous. Indeed, until recently when the trees grew so tall as to obstruct portions of it, they had a 360-degree vantage that included mountains in Montana and Canada.

◦ They could mount a windmill on top that would power a bank of batteries below.

And that’s exactly what they did. It took several years – and they had to sell the bus to pay for the roof – but the goal of being completely self sufficient became a reality.

At first, the tower was narrow and tall, with multiple ladders and staircases to ascend the various floors.

Over the years, the tower expanded to include a larger kitchen, multiple bedrooms, a sewing room, workshops for both Steve and Elizabeth, a reading room, the battery room and more. There is a bathtub. And the bathroom, with its sink, full-size shower and compost toilet is as big as a small office.

Everything from the refrigerator to the stove, oven, freezer and washer is powered by either solar or propane.

(The dozens of solar panels create 12-volt electricity. That electricity is either stored in the 1,400-pound coffin-sized battery set on the ground floor or converted to 110 electricity by a pair of large high-capacity inverters. The battery set can power the home for about three days without solar input, e.g. when it snows constantly. That’s about 30 kilowatt-hours, or about half that when you consider that their lead-acid batteries shouldn’t be taken below a 50-percent charge to maintain longest life.)

The auxiliary outhouse is positively luxurious.

When we visited some 16 years ago and stayed in an upstairs loft, I remember thinking the home felt like a treehouse. Here’s a picture looking straight down from the tower on the last set of steps up to the top.

In the process of building their dream house, Steve became expert at creating independent electric power systems. Eventually, he quit his engineering job at the GTE phone company and Elizabeth quit her job at First Interstate Bank. Together, they founded Backwoods Cabin Power Systems (which soon became Backwoods Solar) and sold their first solar panels in 1980, the day Mount St. Helen erupted. They spent the next 24 years fashioning independent electric power systems for others.

The Backwoods catalog grew from a dozen mimeographed pages listing various devices and specifications to a bound 189-page glossy book with full-color photos, charts, directions and descriptions. Over the years, their clients spanned the globe, ranging from hippies to executives, right-wing survivalists to left-wing environmentalists.

Business was so strong that they built their own helicopter so they could make house calls to their customers more easily. The cement slab on which we camped last week used to be the helicopter’s landing pad.

Steve and Elizabeth sold the million-dollar business in 2004 to several of their employees. It’s still going strong, relocated to a store closer to Sandpoint proper.

These days they spend their time puttering around their property, which has grown to 50 acres and includes some 10 structures to house their hobbies and equipment (e.g. mowers, tractors, cars, trucks, campers, etc.) Steve is currently building an external electric elevator powered by solar energy to make it easier to hoist groceries and equipment from the ground floor to the main living area upstairs.

We took several walks around the property together and marveled at the pine, fir, birch, hemlock and aspen trees. One of my favorite pieces of tree art in their forest is a terra-cotta sign was made of clay by a friend; Elizabeth made the wood frame to protect it from freezing water in the winter.

There are plenty of fabulous views. And plenty of places from which to enjoy them.

One night we enjoyed a wonderful fire at the fire pit Elizabeth made years ago.

Steve has a whimsical side. He created these two figures out of leftover metal; they greet you as you turn into their driveway off the dirt road leading up the mountain from scenic Highway 200.

Elizabeth also has a whimsical side; we loved this Fairy in the Stump she created.

Here are some of the other signs that adorn their property. 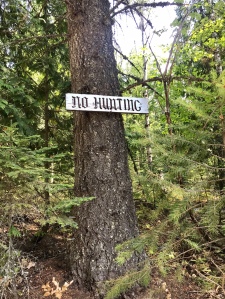 They also enjoy travel. In recent years they’ve taken to leaving their “Cold Mountain” each December in their specially outfitted, solar-powered RV to spend four or five months in warmer, more southerly climes.

One afternoon while we were there, Steve and Elizabeth hosted two families of home-schoolers for a tour of their property and an explanation of electronic systems that are self-sustaining and allow you to live independently. Here’s a photo of the group standing under one of the Steve’s solar-panel structures. 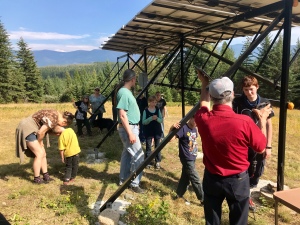 The four adults and seven children (all under the age of about 14) toured the outdoor structures, viewed the huge solar panels, visited the battery room and settled in the kitchen. They asked questions and marveled at Elizabeth’s art along the way.

Interesting people have interesting friends. Another day, we drove to the town of Priest River about an hour away to began the steep ascent up a mountain to meet Backwoods customers-turned-friends John and Mary. John is a retired chef and Mary is an IT specialist who works from home. Natives of Connecticut, they’ve lived for more than 30 years in the solar-powered home they’ve created overlooking the Pend Oreille River.

John and Mary have a generator they use as a back-up when needed. They used it earlier this August to power a portable air conditioner when it reached a record 104 degrees on their mountain one day. See generator shelter below.

They also have an extensive garden, where Mary grows vegetables and herbs under the watchful eye of cherry, pear and apple trees.

John has eclectic interests. He used to have his own sawmill on the property. He enjoys making furniture, baking bread and just purchased an apple press to make cider from their fruit trees.

Later, at home in Steve and Elizabeth’s tower, the four of us spent time reminiscing. We visited the Memorial Tree, where Aunt Clarice and Uncle Frank’s ashes are buried. 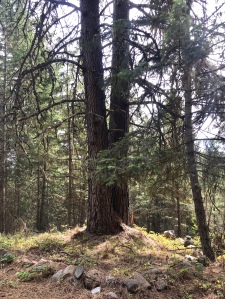 And we exchanged stories about our late fathers – they were brothers. Steve shared some of the genealogy that he (and, earlier, Uncle Frank) had researched. Almost 14 years older than I, Steve has better memories of our grandfather than I do, and I loved hearing them.

I knew my grandfather was a leader of the New Thought Temple in Cincinnati in the early 1900s, for example, but I’d never seen this poem that he wrote.

Steve was G’s inspiration for putting the solar panels on our Casita last summer in preparation for this trip. Those solar panels, more than anything else, have made our no-reservations Year on the Edges of America nearly stress-free. Because we are completely self sufficient (e.g. we don’t need to plug in for electricity because the panels power our battery), we’ve never had to worry about where we’re going to spend the night.

I’m not sure when we’ll see Steve and Elizabeth again. They’re headed this fall for several weeks in New Zealand to celebrate their 50th anniversary.

But I wouldn’t be surprised if we meet on the road again sometime. Maybe this time, somewhere further south in the winter where it’s warmer…..

16 thoughts on “A half century of living off the grid”