At the beginning of our trip, I thought I’d count common names of the geological features we passed along the way and tally up the most common. But that proved too difficult – how do you know what to start tallying? And how do you keep track of them all without driving yourself crazy? So I gave that up.

Counting Casita trailers as we go is complicated enough. (Fifty-two as of San Carlos, Sonora!)

Far more fun are the creative and unusual business names we encounter along the way. I’ve started a list below, and plan to add to it as we go.

I share it for your amusement, and I invite you to enrich the list by adding in the comments section below any fun and creative names you’ve encountered in your own travels.

Before-It’s-A-Quilt is a fabric store in Port Lavaca, Texas.

Another good one from Port Lavaca: Oven-Loven Pizza

On the way to Pensacola, we passed what looked like a second-hand store called “Tots Teens and In-Betweens.”

Pulling into St. Augustine, we passed a restaurant called Blackfly. (I’d rethink that one; why would anyone want to eat in a restaurant named for a germ-infested insect?)

It’s Amazing is the name of a hair and beauty center in Savannah, Ga.

I loved the sign O’ Be Joyful with the Great Egret on it at the driveway entrance to a lovely home on Shem Creek in Mount Pleasant just outside of Charleston, South Carolina. 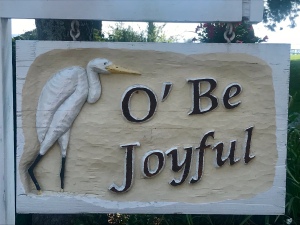 Other Charleston area favorites include:

Badd Kitty – The Perfect Place for Couples is a lingerie chain in the Myrtle Beach area.

Tilted Quilt Pub and Eatery is in Wilmington, N.C.

Fatty’s Eatery in Burton on Hatteras Island, North Carolina. (Another one to possibly rethink?)

Try My Nuts is a specialty nut store in Kinnakeet on the Outer Banks.

This one possibly is my favorite, at least so far: Bob’s Grill: Eat and Get the Hell Out, in Kill Devil Hills on the Outer Banks. (New favorite, added June 22, underlined below.) 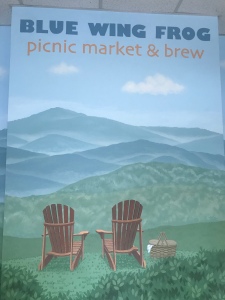 Pig Neck Road in Cambridge, Md. (I don’t think pigs have much of a neck, do they? Yet it seems a long road.)

The Surfing Crab Restaurant and Bar in Lewes, Delaware.

Cool as a Moose gift shop in Maine St. in Brunswick, Maine.

The porta-potty rental company in Brunswick, Maine, owned by the Blow brothers, boasted this slogan for years: “We’re No. 1 in the No. 2 business.”

Mermaid Seekers restaurant at the French River on Cape Breton in Nova Scotia.

Fly-By-Night Cookie Company in the village of Fairhaven, New York.

Sassy Scissors, a salon just outside of Erie, Pennsylvania, where a man’s haircut was listed as $5. Really.

“It’s not cannibalizing if it’s fried” – a billboard advertising something (a chicken restaurant, I think) just south of Pinconning, Michigan.

“Our fish were in school yesterday” – Sol Azteca restaurant in Marquette, Michigan.

Pig ‘n Pancake, a breakfast chain in the Northwest. 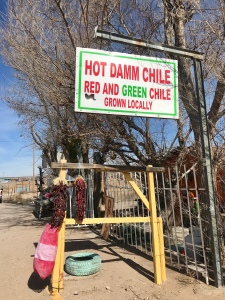 (More to come as we collect them….)