Nearly three weeks into our 52-week adventure – and contemplating our third of 30-plus states to come – it’s hard to say what our favorite experience has been so far.

Attentive readers know from earlier posts to this blog how excited we were to see our first green jay, kiskadee and Altamira oriole, and what fun we had earlier this month cooking and visiting with four generations of cousins in Weslaco.

Since then, we’ve enjoyed bicycling the historic sites in and around Goliad (we knew its “Remember Goliad!” significance but now appreciate it also as the birthplace of Ignacio Zaragoza, who directed the underdog Mexican Army’s unlikely victory over the French Empire in 1862, establishing Cinco de Mayo as a date of historical significance) and boondocking on the beach at Sea Rim State Park (Brownie points if you can find it on a map). On the beach we enjoyed a delicious fresh-cod-beurre-blanc-over-shell-pasta dinner and listened alternately to the waves and Strunz and Farrah.

Most definitely on our list of All Time Favorites are the spontaneous evenings we spent with the Gonzalez family at the Adolph Thomae Jr. County Park near the coast just 40 minutes northwest of Harlingen.

It was a Saturday noon when we arrived at campsite #13 at the park, which is popular with local fishing enthusiasts and families with small children on leave for spring break. After a long bike ride and as the sun was nearing the horizon, we began thinking about dinner. Georges pulled our small, two-burner Coleman stove from the camp box in the back of our Xterra and hooked it to the large external propane tanks on our Casita.

Suddenly a voice bellowed from two campsites over: Don’t bother with your grill. Come use ours.

I’m serious, said the stranger. I’ve got food for an army here.

That’s very generous of you. But we don’t want to intrude.

It’s not intruding. We’d love for you to join us.

And so we did.

We gathered our New York strip steak, a small bottle of tequila and a tray of bakery-fresh pan de polvo (Mexican wedding cookies) and off we went.

It turns out that Xavier Gonzalez, 55, loves to cook and shares his food as generously as the sun shares light.

He and his wife, Samantha, and their five-year-old, Lilly, live in the Laredo area and have checked their 28-foot double-axle Jayco pull-trailer into the county park for the week. He manages something having to do with oil rigs and travels a good bit – Uvalde, Concan, Hebbronville, Midland, Del Rio. Xavier grew up in Harlingen.

Visiting them tonight from Harlingen is Xavier’s nephew, David, and his wife, Lindsey, and their daughters, 9-year-old Jordan and nine-month-old Payton. David is a fishing guide and in law enforcement.

Xavier also has two gi-normous grills and a smoker that he transports in the back of his 6.75L Ford Lariat diesel truck.

As we arrived, Xavier was in the midst of serving up slices of his monster quesadillas – a grilled tortilla layered thickly with chunks of well-seasoned steak, cheese, tomato and avocado, topped with another grilled tortilla – together with “devil’s saliva” hot sauce.

And then there was the freshly grilled deer sausage and jalapeño wraps.

And these were just the appetizers. 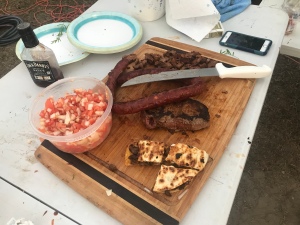 Do you like that deer sausage, Xavier asked. Oh yes, we said. (I’m not generally much of a sausage fan, but these dense, meaty slices were especially tasty.)

Xavier disappeared briefly. He reappeared to thrust into G’s hands two packages of fresh-ground deer sausage, the fruits of a hunting friend’s labor who had apparently bequeathed Xavier more deer sausage than he and his family could handle.

As my father used to say: Twist my arm.

We passed the next four-plus hours chatting about everything and nothing. We told them of our Year on the Edges of America adventure and enjoyed playing with their big-pawed three-month-old black labs, Trigger and Gunner. They told us of bargain trailer purchases from oil drillers looking to move on and introduced us to the richness of Don Julio 1942 tequila and its delicate linger of unsweetened chocolate on the palate after each sip. 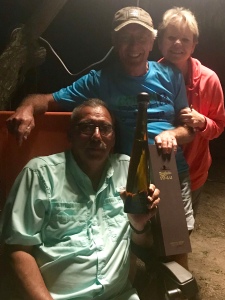 Shadows danced on the towering, gnarled branches of the ebony and mesquite trees that had provided the campsite’s afternoon shade. They provided a warm and slightly mysterious glow to our corner of Earth.

At some point in the evening, I snapped a photo of David rocking Payton to sleep and emailed it to Lindsey, hoping they might frame it and put it on a desk or mantle somewhere. I also hoped that exchanging email addresses might allow us to stay in touch.

We found we agreed on much that evening – the joy in sharing fresh food, well prepared, with friends; the importance of rich relationships and new experiences.

But we didn’t agree on everything. They’re Miller Lite, for example; we’re Shiner Bock.

Eventually, we drifted back to our campsite and tumbled into bed.

The next day, Xavier would be grilling red drum and we were invited to return. Xavier is a great cook of Mexican and American fare, and he often chefs for large, spontaneous groups of friends and family. But it turns out he knows little of French cooking and is curious about G’s beurre blanc.

It would be a pleasure.

16 thoughts on “Dinner with the Gonzalezes”