Maybe this yearlong road-trip thing is going to work after all. We’ve just marked our one-week anniversary on the road and it felt like a celebration.

Tensions have eased, tempers have calmed and the pure joy of simple living and traveling has returned. Our traveling bedroom is comfortingly familiar but we get to try out an exciting new “living room” nearly every day. Gives new meaning to the concept of A Room With a View.

Several developments helped smooth our wrinkles. First, we had a great time at the Bentsen-Rio Grande Valley Birding Center in Mission, Texas. The great kiskadees and green jays were gorgeous, and we got close-up views of more chachalacas. The snorting black javelina added an unexpected dimension to the kingfisher blind.

Later we had quite a conversation with this great blue heron at Boca Chica beach in the southeastern-most tip of Texas. 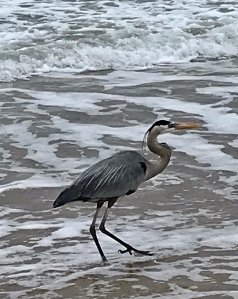 It also helped that Georges took a day to get the oil changed on the Xterra, grocery shop and putter on his own for a bit while Mom and I got a personal tour of the mid-Rio Grande Valley from my cousin, a 43-year resident of Weslaco. (One favorite detail: Weslaco’s Harlon Block was one of the flag raisers on Iwo Jima; it was his omission from the list of soldiers in the iconic photo that formed the heart of the excellent 2006 Clint Eastwood-directed film, Flags of our Fathers.)

With Mom comfortably ensconced at Carol’s we all enjoyed some breathing space. I actually enjoyed doing laundry – alone.

Most significant, however, are the two grand dinners we enjoyed with several generations of cousins. What a great group of wonderful young people – smart, generous, hard working and talented. All told we ranged in ages from five to 90! 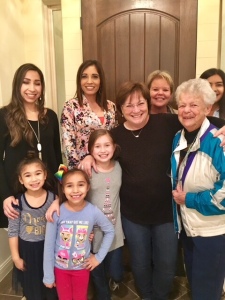 Georges is always happiest creating culinary delights in the kitchen, and he found a new favorite sous chef in cousin-once-removed-by-marriage-David. The rest of us were the happy beneficiaries of their salmon-and-Brie presentation. And of course, there was the ceremonial champagne popping!

A couple of nights later Carol made the best calabacita and nopalitas for Mom, Georges and me. Outstanding! 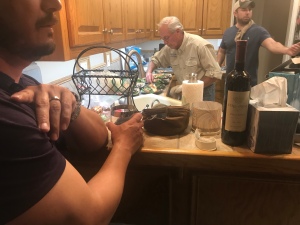 Soon we’ll be headed north, sticking fairly close to the coast. Who knows what next week holds.

At this point, I’m liking this week a lot.